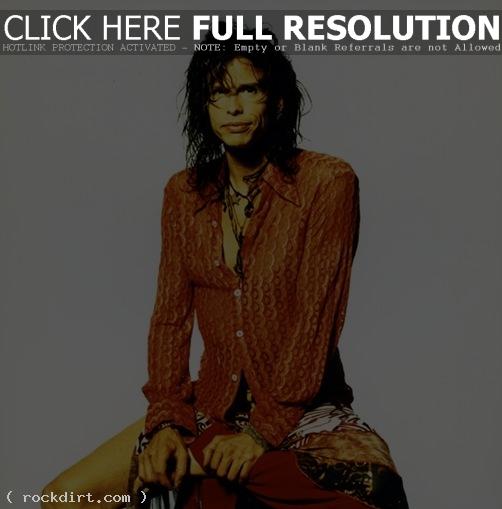 ‘Jimmy Kimmel Live’ roasted on ‘American Idol’ judge Steven Tyler with his latest “Creepy Leer of the Night” after Thursday night’s Hollywood elimination rounds. “The 60 singers that survive tonight will go to the show’s first ever Las Vegas round next week,” Kimmel explained. “Great, another place where Steven Tyler won’t hit on anything over 16.”

The comedy bit at YouTube has since been removed.

‘Jimmy Kimmel Live’ joked about Steven Tyler’s behavior towards young female contestants on ‘American Idol’ during his monologue the other night. “Steven Tyler is apparently under the impression he’s part of a reality dating show,” Jimmy joked. “He looks at these young girls like a rottweiler looks at roast beef.”

Video of the Aerosmith singer get a surprise visit from Chris Hanson of ‘Dateline NBC’ and one of his creepy leers at YouTube have since been removed.

The ‘Jimmy Kimmel Live’ monologue featured a bit with Steven Tyler after the Aerosmith singer reportedly performed a couple songs through the intercom system at Home Depot.

The ‘Home Depot Tour’ ad via Jimmy’s YouTube has since been removed.

Steven Tyler surprised the crowd at end of the Joe Perry Project show at the Fillmore New York at Irving Plaza on Tuesday (November 10), announcing that he wasn’t leaving Aerosmith days after Perry said he had quit the band. Watch their performance of ‘Walk This Way’ at the show below.

Steven Tyler Tripped On His Lips?

‘Jimmy Kimmel Live’ host Jimmy Kimmel interviewed Steven Tyler in the hospital in South Dakota after the Aerosmith singer fell off stage at Sturgis. The faux Tyler said he tripped on his lips. Watch the comedy clip at LiveLeak.

Steven Tyler of Aerosmith and girlfriend Erin Brady were photographed sharing a smoke outside the Trump International Hotel before going for a walk on the upper West side on June 24th. Pictures from bauergriffinonline.com have since been removed.

Steven Tyler of Aerosmith donated memorabilia to the Seminole Hard Rock Hotel and Casino on Friday (December 7) in Hollywood, Florida. Check out pictures from GettyImages.

Steven Tyler of Aerosmith and Vince Neil of Motley Crue performed at the Seminole Hard Rock Hotel and Casino on Friday (December 7) in Hollywood, Florida as part of the 9th Annual Fort Lauderdale Harley-Davidson Bikers Bash. Check out pictures from GettyImages.

Spotted at LAX Airport, Aerosmith legend Steven Tyler was asked about Britney Spears, who he performed with at Super Bowl XXXV in 2001. “We’ve got to write a song together, we’ve got to get busy,” Tyler said. “We gotta find a reason, another reason. Like in the old days. We gotta find another reason.” He added, “If it was back in the old days, we had our turn in the barrel. We were all over the press. It’s just what happens. She’s livin’ in the tail of a comet like the rest of us. Going through a rough time.” YouTube has since removed the video.