Altitude TV caught up with the drummer for Incubus at the Hollywood Bowl on July 13th, where Jose Pasillas talked about going on a hiatus before this album, how ‘Love Hurts’ became an unintended hit and how they’ve avoided getting pigeonholed into a genre, allowing them to adapt their sound album to album and tour with acts as different as Sugar Ray and Pantera.

Gomez perform on ‘The Tonight Show with Conan O’Brien’ (NBC) on Monday.

The All-American Rejects perform on ‘The Tonight Show’ (NBC) on Tuesday.

The Script perform on ‘Jimmy Kimmel Live’ (ABC) on Tuesday.

Glasvegas perform on ‘The Late Late Show with Craig Ferguson’ (CBS) on Thursday.

David Cook performs on ‘Live with Regis and Kelly’ (ABC) on Friday. 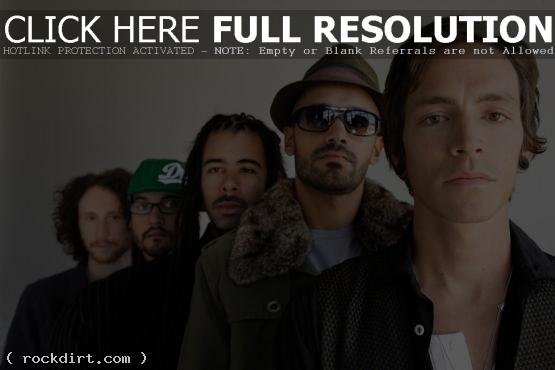 Spinal Tap, who perform on ‘The Tonight Show with Conan O’Brien’ (NBC) on Monday.

Gavin Rossdale, who performs on ‘The Tonight Show’ (NBC) on Tuesday.

Incubus, who perform on ‘The Tonight Show’ (NBC) on Wednesday.

Phoenix, who visit ‘It’s On with Alexa Chung’ (MTV) and ‘The Late Show with David Letterman’ (CBS) on Thursday.

The Dead Weather, who perform on ‘The Tonight Show’ (NBC) on Thursday.

The Fray, who perform on ‘Late Night’ (NBC) on Thursday.

Metric, who perform on ‘The Late Late Show with Craig Ferguson’ (CBS) on Thursday.

Incubus and The Bravery performed at the Hard Rock Hotel & Casino on Thursday (September 6) in Las Vegas, Nevada. Check out pictures from GettyImages.

Incubus performed in concert on Monday (September 3) at The Backyard in Austin, Texas. Check out pictures from FilmMagic. Watch fan filmed highlight clips from YouTube.

Brandon Boyd Has Lunch In Malibu

Incubus performed in concert at Goffert Park in Nijmegen, The Netherlands on Thursday (June 28). Check out pictures from WireImage. Watch fan filmed highlight clips from YouTube.

30 Seconds To Mars, Incubus, The Bravery, Interpol, Rise Against!, and Linkin Park performed at the KROQ Weenie Roast Y Fiesta 2007 on Saturday (May 19) at Verizon Amphitheater in Irvine, California. Listen to interviews and check out pictures at KROQ.com. Watch footage from YouTube. Check out pictures from FilmMagic, RexFeatures, and WireImage (show / backstage).

May 24, 2007 rockdirt Multimedia, Photos No Comments