‘Access Hollywood’ caught up with ‘American Idol’ season four runner-up Bo Bice, who proved that despite all this time in the spotlight, he’s still a true “southern gentleman”. Watch the segment below the fold.
END_OF_DOCUMENT_TOKEN_TO_BE_REPLACED

Many ‘Idol’ Stars, Including Bo Bice, Get Dropped From Label

“It’s not really let go as much as contracts are up,” Bice said of his departure. “You either decide to renew a contract or you don’t.” Bice was given a gold record for his first CD by RCA Records right after they let him go. “Two weeks after, three weeks after we parted ways with RCA, I was up her in New York getting a gold album from them for ‘The Real Thing’,” Bice explained. Now, Bice has released his second album independently through Wal-Mart. “A lot of this stuff has to be bankrolled by my pockets,” he said, “and I don’t have deep pockets.” Watch the segment at CNN.com.

‘American Idol’ season four runner-up Bo Bice is out with the video for his new single ‘Witness’, the lead single from the Huntsville, Alabama native’s sophomore album ‘See the Light’, out October 23rd on the indie label $ugarmoney / StratArt. Watch it below.

‘American Idol’ season four runner-up Bo Bice is out with the video to his new single ‘Blades Of Glory’ from the film’s soundtrack. Watch it via YouTube below.

‘American Idol’ season four runner-up Bo Bice sings title track for ‘Blades of Glory’ and spoke with Fox News Channel’s Bill McCuddy about the power ballad and his thoughts on the new season of ‘Idol’. 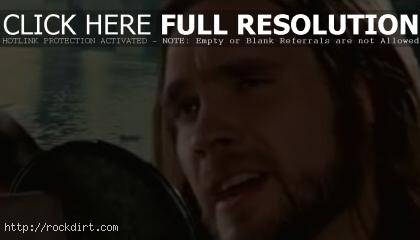 Ricky Medlocke of Lynyrd Skynyrd tells KXPT’s Foxx and MacKenzie morning show that before the finale of last season’s ‘American Idol’ where they performed with Bo Bice, the contestant “got trashed in L.A. and damn near got alcohol poisoning”, perhaps dooming his chances to beat Carrie Underwood. “I tried to tell him, ‘Ya know dude, this ain’t going to work. We fly all the way across the country to play the finale with you, and you get trashed like that; that don’t work with Lynyrd Skynyrd’,” Medlocke said. The full story at reviewjournal.com has since been removed.

May 8, 2006 rockdirt TV Appearances No Comments

Last year’s ‘American Idol’ runner-up Bo Bice visited ‘Dayside’ to share his secrets of success on the program. He resisted the hosts’ efforts to get him to comment on a bar fight Sunday night with ex-New York Giants football star Glenn Parker, detailed at MTV News.