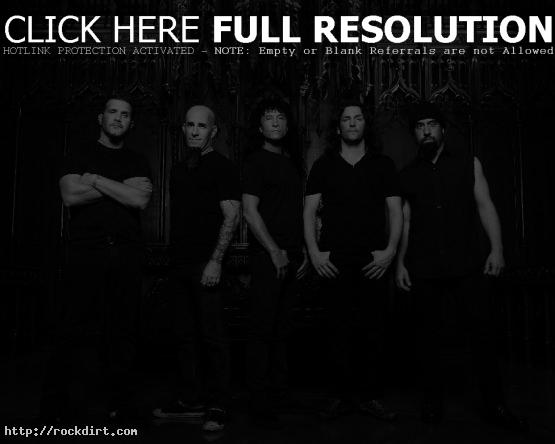 Fans that pre-order the new Anthrax album ‘Worship Music’ at Bestbuy.com can gain entry into a free exclusive Anthrax show. After purchasing the Ne York City heavy metal band’s tenth studio album at the web site, entering your Best Buy 12 digit order number at freesecretshow.com allows you to get a free ticket while supplies last. The show will be at the Best Buy Theater in Times Square NYC on Monday September, 12 at 8 PM. Bring your ticket, BestBuy.com receipt, and photo ID the night of September 12th to get into the show.

Find out what it’s like to walk on stage with Anthrax at Sonisphere Festival 2010 in Knebworth with footage from NME. The guys are seen hopping in a van joking about a live set that would include “nothing but showtunes” before doing a brief photo session and making their way on to the stage. Watch footage via YouTube below.

Anthrax drummer Charlie Benante spoke to NME about the Sonisphere Big 4 show in Warsaw, Poland and how the event came about thanks to an idea from Lars Ulrich when Metallica was inducted into the Rock and Roll Hall of Fame. He also mentioned the band’s tribute to the late Ronnie James Dio. “We have a thing that we’re gonna do as a tribute to Ronnie Dio,” Charlie explained. “That we’re gonna incorporate in our show, because that was something that kind of hit us all a bit hard because Dio is one of our… we looked up to him not only as a singer, but as a human being. He was such an awesome person, so it’s our little tribute to him.” Watch the interview via YouTube below.

Scott Ian At The Revolver Awards

Scott Ian of Anthrax spoke with Altitude TV on the black carpet of the Revolver Awards on the band’s new record and tour. “We’re probably about a month away from being done, and I think it’s coming out in October,” Ian said of the CD, adding that they’ll start touring Europe in June.

The interview with Scott has since been removed by Altitude TV, but check out his chat with Revolver below.

Scott Ian of Anthrax, Whitfield Crane of Ugly Kid Joe, and Shawn Kilkenny of Dog Eat Dog were on hand for Mike Diamond’s Birthday Party on Thursday (June 14) at Retox in New York City. Check out pictures from WireImage.

Anthrax Drummer Gets Out The Vote

It’s that time again, you get to vote — YEAH!!! Let’s all meet up at the going out of business Tower Records in Shaumburg and make a change. Oh boy, Herman Munster, I mean John Kerry really screwed up, or did he? Of course not that the troops are stupid. It’d like to see Kerry or Bush drive a tank or guide a missile. It’s the politicians and commanders that got us into this mess are the morons and we’re still a nation where all too often it’s the young, the poor or less fortunate fighting the wars. It’s not like you’ll see Paris Hilton or Harvard grad students signing up to fight anytime soon. I wonder if our troops over in Iraq thought for one second that by enlisting in the armed forces that they would be fighting for their lives every day? I guess it’s a thought that you hope wouldn’t become a reality, but it did. No battle lines, you’re just a moving target. No enemy troops just road side bombs and fanatics with sand in their ass crack blowing themselves up. In fu**ing sane. Enough about that. We need to make a change in this country. I hope it happens this Tuesday.

The entire message at anthrax.com has since been removed.

Pictures at abacausa.com have since been removed.