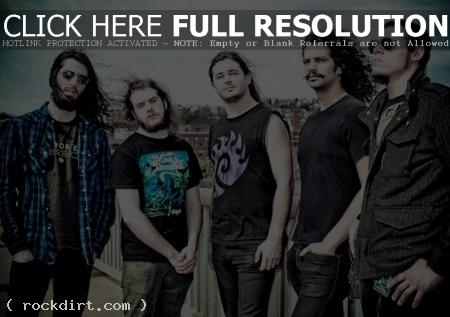 After completing a 7-week North America tour supporting Iced Earth and Symphony X, Warbringer are ready to head out on the road again soon. For their next North American tour, the band will join Destruction, Vital Remains, and Pathology from May 8th to June 3rd, and after that, they’ll appear at various high-profile Summer festival appearances in Europe. Vocalist John Kevill checked in to comment about these upcoming shows:

Hey all! Checking in at the end of the ICED EARTH and SYMPHONY X tour. We had a great time with those guys, there was a slew of incredible shows with awesome heavy metal fans in abundance, and a bunch of good times with both of those fine bands! Shame to say goodbye to them, but we’re on our way home now to recuperate before beginning out next tour with German thrash metal legends DESTRUCTION, on their 30th anniversary tour! We never rest long, the war rages on! We’ll see you guys out on the road again in May, prepare to be annihilated!

We’re also very excited about the way our summer is shaping up. We have about a dozen European festivals confirmed and we look forward to sharing some amazing experiences ravaging the large crowds, big stages and all the fun times to be had with all the other great bands also performing.

See below for a list of upcoming North American tour dates featuring Warbringer.

In addition to these newly announced dates, Warbringer have now also launched a special, professionally filmed rehearsal-room video of the sessions from their latest album release, ‘Worlds Torn Asunder’. The clip showcases former longtime guitarist Adam Carroll, who left the group earlier this year and has since been replaced by Andrew Bennett. Watch the video of the band performing the merciless track ‘Future Ages Gone’ below.

This exclusive footage is available on a USB drive that the band sells on tour. In addition to featuring this video, the USB also includes all three studio albums and a four-song rehearsal video.