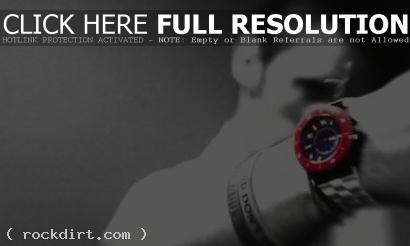 Valiant Watches and The All-American Rejects’ lead singer Tyson Ritter launched a partnership campaign this week in support of Ritter’s charity Don’t Hate on Haiti, along with a touching video about the campaign. Twenty-five percent of proceeds from sales of Valiant’s featured BE.REAL Watch, as well as from sales using promotional code DHOH, will be donated to the organization, which is dedicated to bringing clean and safe drinking water to remote communities in Haiti.

“I’m so fortunate to have Valiant Watches partner with me to keep up awareness for those doing without in Haiti,” said Ritter, who confirms that 100% of donated funds go directly to building clean water projects for the people of Haiti. Every $5,000 raised translates into a clean water well built in Haiti. In addition to supporting DHOH, Valiant customers who purchase the featured watch or use the promo code will be entered for a chance to win a guitar signed by The All-American Rejects.

“Valiant is honored to be partnering with Tyson Ritter to benefit Don’t Hate on Haiti,” said co-founder Tracy Franco. “Our hope is to give support to those who need it most.”

May 12, 2012 rockdirt Multimedia No Comments The All-American Rejects