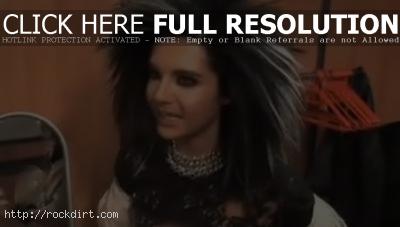 Tokio Hotel TV episode 14 continues behind the scenes footage of the German rock band’s visit to Cannes, France for the NRJ Music Awards, where they won the Best International Artist gong. Bill Kaulitz and his bandmates explained the feeling they have winning awards. “The moment before they announced the winner feels really strange,” Bill said. “It’s hard to describe… The second they announce the winner’s name my heart skips for a moment. Then my heartbeat continues and then it feels like it stops again. It’s also really hard to breath.” The guys then celebrated with some champagne. Bill then talke with the press about how supportive their fans are. After posing for pictures with the Princess of Monaco, they headed off to an afterparty. The clip ends with the band checking out of their hotel and heading to the airport to return home to Hamburg. Watch the clip at YouTube.