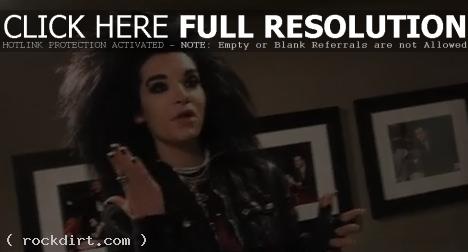 Tokio Hotel TV episode 48 features the German rock band making an appearance on ‘Jimmy Kimmel Live’ in Hollywood. They’re first seen backstage talking about how they will be introduced, then they fill up on cheeseburgers and watermelon. After coming out for a soundcheck, Bill Kaulitz talked about some singing difficulties. “These soft parts make me struggle sometimes because it makes me kind of collapse inside,” he explained. “I’m just shaking.” His brother Tom then joked, “During these performances the only thing scaring me is Bill.” The behind the scenes footage ends with highlights from their performance. Watch the webisode at YouTube.