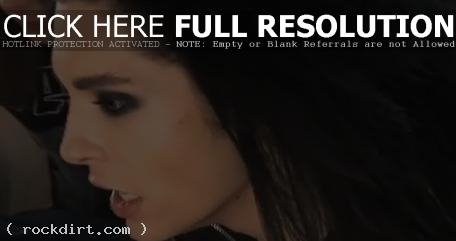 Episode 36 of Tokio Hotel TV features the German rock group at a “private party” in Geneva, Switzerland hosted by Bill Kaulitz — actually it was Bill goofing off with a fan. Earlier, the guys took part in a telephone interview Argentina press. Asked about their future plans to record in English or German, Bill Kaulitz said, “We definitely want to continue in both languages. First I come up with songs in German since it’s my mother tongue – we record the songs in German and after do a word for word translation to English just like we did for the ‘Scream’ album. During our U.S. concerts, I even sang some songs in German because the fans asked for it. That made us happy.” The clip ends with the band performing at The Arena on July 12th. Watch the segment at YouTube.