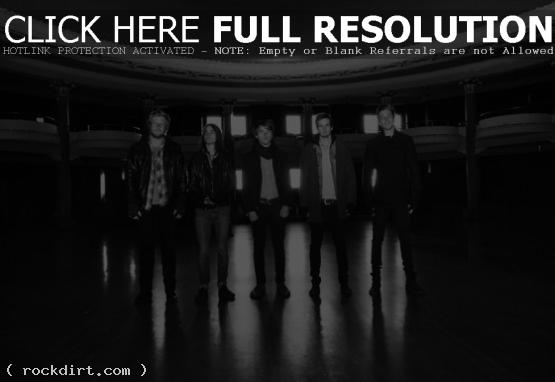 Since the inception of The Maine in 2007, they have been releasing music that they were proud of. They toured the world playing songs off their debut album in 2008 (‘Can’t Stop, Won’t Stop’) to last year’s major label effort (‘Black & White’). The Arizona rockers are closing out 2011 with their third studio album titled ‘Pioneer’, released December 6th.

The creation of ‘Pioneer’ was an enlightening experience for the band. They moved into a farm in Gilbert, Arizona to write the songs for the album and came out with over 40 to choose from. After deciding upon which songs would be released on ‘Pioneer’, the band and label had a difference of opinion and decided to release the new album independently on the bands label, Action Theory Records and it would be distributed by Warner. Members John O’Callaghan, Kennedy Brock, Jared Monaco, Garrett Nickelsen and Patrick Kirch stood behind their decision to create and share this album with fans and would not have it any other way.

“This record represents persistence, passion and the failure to give in when all around have given up. Pioneer initially started out as an experiment. In this experiment, we attempted to take the creative process to lengths we had never gone before. We wrote and recorded 9 songs, took them to the powers that be, and were rejected. Instead of allowing this denial to be the end, we decided to take things further. Heading back to El Paso, TX we recorded an additional 17 songs, self-funding & co-producing (along with Colby Wedgeworth) them all while knowing there was a possibility they’d never see the light of day. Through it all, the only thing that kept us going was knowing that our fans were there for us,” says The Maine.

The band will be on a headlining tour overseas 1/11 through 2/4. To see all tour dates, visit wearethemaine.net.