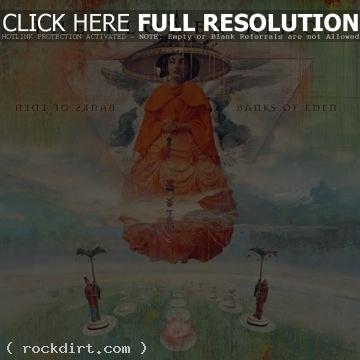 After five years of absence, progressive rock band The Flower Kings will release their new studio album on June 19th in North America and June 18th in Europe. Led by mastermind Roine Stolt [Transatlantic], the new album is called ‘Banks Of Eden’ and will be released via InsideOut Music. The material is classic Flower Kings, with all the dreamy, melodic and cinematic elements that fans around the globe have learned to love over the years. However, the 2012 incarnation of the band mixes it up with both psychedelic and darker metal passages that place this album somewhere in between the late 60’s proto prog and the new generation of art rock.

It was both a scary and exciting prospect to go back into the studio after an almost 5 year-long, well-earned hiatus. We have all been active with Transatlantic, Karmakanic, Agents Of Mercy since, so we were up to speed in the playing department, but starting TFK again put some weight on my shoulders I suppose, but it’s fun. We knew we could make an album ’cause this is what we do and we know we do it good, but the question was if we had anything new or anything important to contribute in 2012, in a time when the internet fills every hour with entertainment and every town or village seems to have emerging prog superstars. Realizing now with ELP, Crimson, Genesis, Gentle Giant and Pink Floyd being history, we are among the new eldermen of Prog and we feel responsible for keeping the standard up, so a lot of hard work is gonna go into the coming months.

The core members were there and for this re-starting of TFK we brought in new 26 year old drummer prodigy Felix Lehrmann. Without playing one single note together, or no audition, we started the recording at Varispeed studios in Sweden, January 23rd, taking a big, big chance. It is with happy smiles on our faces that we can conclude that it was a jackpot and a great choice and we feel Felix is gonna breathe life into both the new and old material in a live setting, possibly with a more hard hitting edge. His outgoing personality and general love for music and playing will be very evident live and for coming albums I can feel he may contribute even in writing.

The progressive daredevil at the helm made us start the new album with a 25 minute epic centerpiece that is NOT easy listening, it is in fact a quite demanding task. But the material also has all classic elements of The Flower Kings style with all the dreamy melodic & cinematic glow sprinkled all over, that the band’s fans have come to love over the years. My advice is: just give it time and it will be very rewarding.

While in the studio recording Banks Of Eden, the band filmed a few behind-the-scenes videos allowing fans the chance to share this experience with them. Several other videos should be released in the coming weeks, and the first one can be seen via YouTube below.