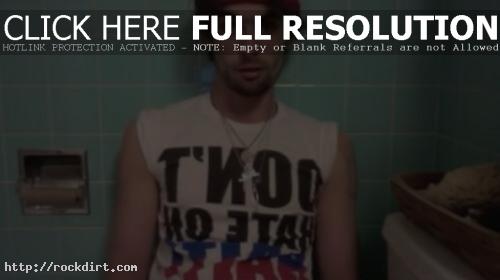 The All-American Rejects have spent the last year writing new material and are ready to hit the studio to record their fourth studio album. Over the last year, the band’s frontman Tyson Ritter has also spent a great deal of time on his charity, Don’t Hate on Haiti. With the band heading into the studio, Tyson has dreamed up a contest as a way to help raise money for the charity. To promote the Don’t Hate On Haiti Contest, Tyson took to the blog on The All-American Rejects newly remodeled official website, with a video and a letter that reads:

So, we have been writing relentlessly for the last year and are hitting the studio to lay down the tracks for our fourth record soon. My last year has been devoted to music and my charity, donthateonhaiti.org. So far, we have donated about $25,000 to Charity:Water, a true not-for-profit organization that builds clean water projects across the world. Every $5,000 we generate builds a clean water well in Haiti.

To coincide with our going into the studio the band and I have decided to have a contest to help maximize our efforts to generate cash for the cause. So here’s the idea:

Whoever raises the most money for donthateonhaiti.org by April 1st of this year will win the following sweet ass prizes.

1. A one-on-one skype session with you and the band in the studio to talk about tunes, the charity, what you ate for lunch, whatever you want!

2. A guitar signed by the band

3. A Don’t Hate on Haiti shirt signed by the band

All you have to do to win is spread the love and raise as much dough as you can. Once we have all the monies counted and collected, we will announce the winner on all our social networking outlets.

Send all contributions to:

Attach your contact information so we can reach you if you’re the lucky winner!!