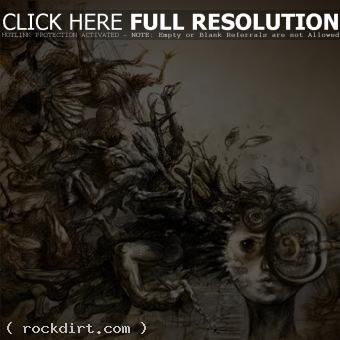 Extreme metallers The Agonist will be unleashing their third studio album ‘Prisoners’ on June 4th in Europe and June 5th in North America via Century Media Records. In regards to the album artwork, frontwoman Alissa White-Gluz commented:

We wanted to really include a chaotic visual to reflect the chaotic sound of the band, but we also wanted to show that the lyrics on this album are a lot more introverted…The human face was left non-descript on purpose– it doesn’t belong to any particular person, but we could call him the Lonely Solipsist.

Prisoners Tracklisting:
1. You’re Coming With Me
2. The Escape
3. Predator & Prayer
4. Anxious Darwinians
5. Panophobia
6. Ideomotor
7. Lonely Solipsist
8. Dead Ocean
9. The Mass Of The Earth
10. Everybody Wants You (dead)
11. Revenge Of The Dadaists

Throughout their North American tour with Kittie, The Agonist will be selling digital download cards that feature two tracks from Prisoners: ‘Ideomotor’ and the previously limited edition EP-only track ‘The Escape’. These tracks will be available for immediate download, with the remainder of the album available on release day. Dates for this trek are below.

May 12, 2012 rockdirt Concert, News No Comments The Agonist