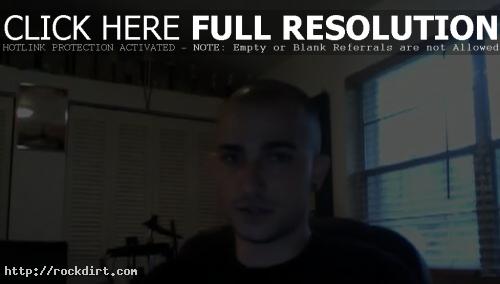 Trivium are putting together a special promo video of all their touring and they want fans to narrate it. “I need as many 10 to 30 second video clips of you guys talking about how you discovered Trivium,” bassist Paolo Gregoletto said in a video providing details on what he’d like from the fans. “What albums you like, what songs you like, anytime you’ve seen us live, how that was.” Watch the comments via YouTube below.

Corey Beaulieu, Nick Augusto and Paolo Gregoletto videotaped themselves having fun at Corey’s home recently. The guys are seen goofing off around the house with the help of food packages, vacuum cleaners and a Mexican wrestling mask, all set to Trivium’s ‘Angel of Death’.

Matt Heafy and Paolo Gregoletto from Trivium joined Simon on the Kerrang! Video podcast to talk about life on the tour bus, the story behind drummer Travis Smith getting replaced by Nick Augusto, how they’re better live now than ever before, their recent UK tour and their upcoming fifth studio album. “It was hard but we absolutely wish him nothing but the best in the world,” Matt said regarding Travis. “I think that whether realizing now or five years from now or a month from now, I think it’s better for him healthwise, mental wise, everything to be stepped out, to be doing his own thing. I think it’s for the best for all five of us.” Watch the interview via YouTube below.

Trivium ‘Shattering The Skies Above’ Video

Trivium are out with the video to their new single ‘Shattering The Skies Above’, off the Orlando, Florida heavy metal band’s digital EP ‘God Of War: Blood & Metal’, out March 2nd. Watch it via YouTube below.

Trivium Coming To Indonesia And The Phillippines

Trivium checked in on their YouTube channel to discuss tour stops in Indonesia and the Phillippines. The band are playing at Tennis Indoor Senayan in Jakarta on February 11th, then bringing their show to A Venue Concert Hall in Manila on February 13th. Watch the message below.

Altitude TV’s Full Metal Jackie spoke with Matt Heafy of Trivium at the Rockstar Mayhem Tour, where they talked about how all the bands are in a really good mood, how “nobody is being a dick which you usually see a lot on festival runs”, being booked through April 2010, and being a big Twitter user. Watch the interview, featuring footage from the Orlando band’s live set, via YouTube below.

Paolo Gregoletto of Trivium checked in on the band’s YouTube channel, offering some thanks to companies and people before talking about their 63 date Into the Mouth of Hell We Tour. “If you want to get sexy with Trivium, you’ve gotta come out to a show,” Paolo said. Watch the message below and check out the first leg of tour dates below the cut.

END_OF_DOCUMENT_TOKEN_TO_BE_REPLACED

Trivium’s “Paolo Cam” features an on-stage look at the band performing ‘Pull Harder On The Strings Of Your Martyr’ during their headline set at Download Festival 2009 in Donnington Park earlier this month. Watch it via YouTube below.

Trivium were stuck on the plane after landing in Tokyo, Japan, being quarantined for swine flu. The band’s bassist Paolo Gregoletto documented the drama on the band’s YouTube channel. Watch below.

The last day of Trivium’s rehearsals were documented by Paolo Gregoletto in a video clip at the band’s YouTube channel. “I think this fu**ing tour is gonna rock,” Paolo says driving to the location. The band performed in Toronto tonight with Slipknot. Watch below.

May 2, 2009 rockdirt Multimedia No Comments