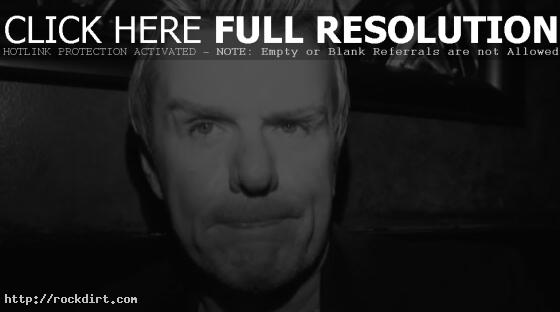 Rockerrazzi.com interview with Billy Duffy of The Cult and his girlfriend A.J. Celi. They talked about whether the reality show process was what they expected on ‘Married to Rock’, how she convinced Billy to do the show, Manchester City soccer, the future of the band, touring, the phases of how he appreciates music, and how Billy is a big fan of gardening. Watch the interview via YouTube below.

Ian Astbury and Billy Duffy of The Cult dropped by 93.3 WMMR in Philadelphia on Friday (November ). They talked about the praise the new line-up has received from fans, plans for new material, Ian being compared to Jim Morrison of The Doors, where they’ve been living, Ian’s pleasure that Donald Rumsfeld resigned, and more. They also performed an acoustic version of ‘Star’.

Audio at gmppodcast.com has since been removed.

The Cult Perform In Bristol

The Cult performed on Monday (September 18) at Bristol Academy in Bristol, England. Check out pictures from WireImage.

The Cult Perform On ‘MTV Live’

The Cult performed on ‘MTV Live’ on May 26th at the Masonic Temple in Toronto, Ontario. Check out pictures from WireImage.

The Cult Perform In Las Vegas

The Cult performed at The Joint at The Hard Rock Hotel and Casino on Friday (March 3) in Las Vegas, Nevada. Check out pictures from WireImage.

The Cult Perform On ‘The Late Late Show’

The Cult’s performance of the song ‘Wild Flower’ on ‘The Late Late Show with Craig Ferguson’ on Friday night (February 24) on the CBS-TV network has been made available for viewing at YouTube.com. Watch it here.

Heather Bieber of the Las Vegas Weekly reviewed The Cult concert at the Joint on Thursday. Bieber says the group is still “producing a tight sound after 20 years” and added, “The obscure set list reflected a full evolution of the band’s music, from the early years as Southern Death Cult to a few songs from ‘Beyond Good and Evil.’ Although [guitarist Billy] Duffy seemed to have some technical difficulty toward the end of the show, the band exploded with energy that mirrored the crowd’s enthusiasm.” Lasvegasweekly.com has since removed the article.

The Cult Backstage At The Hard Rock Hotel

WireImage.com has photos of The Cult backstage at the Hard Rock Hotel And Casino
Las Vegas, Nevada on Wednesday (October 16). Check out the pictures here.

The Cult On Hiatus

The Cult bassist Billy Morrison told fans on the group’s official site message board that the band is on hiatus. Billy said, “Here it is from my point of view. This is what Ive been told. The Cult are on ice …… which does not mean ‘split up’. It means Ian and Billy are doing other things. As the new guy, I consider myself lucky to have been able to be a part of such a great band. If I get the phone call to play, I’ll be there. I always said I was loyal. Until then, my intention is to make my own music, as I am sure the others are doing as well. I am finishing demos as we speak, will be looking for the rest of my band (all rumours about my guitarist are unfounded right now!!!) and will be playing shows as soon as all that is in place.”

New bassist for the Cult Billy Morrison profiled the entire 2001 Cult Tour with Aerosmith so fans can check out what it is like touring as a rock star. Check out the rather detailed diary with accompanying photos at thecultnet.com.