Kerry King spoke to NME about the Sonisphere Big 4 show in Warsaw, Poland. “Who would have ever thought the four of us getting together would be important enough to have like 80,000 people show up in Poland,” the Slayer guitarist said. “It’s pretty awesome.” Watch the brief discussion via YouTube below. 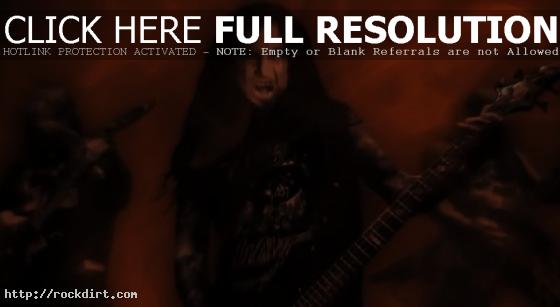 Slayer are out with the video to their new single ‘World Painted Blood’, the title track off the Huntington Park, California metal band’s tenth studio album, out now on American Recordings/Sony Music. Watch it via YouTube below.

Marilyn Manson performed ‘Irresponsible Hate Anthem’ live at the Wiltern in Hollywood on Saturday (February 23), joined by Slayer’s Kerry King. Watch the performance via YouTube below.

Marilyn Manson and Slayer performed in concert at the Verizon Wireless Amphitheater on Sunday (September 2) in San Antonio, Texas. Check out pictures from FilmMagic and GettyImages. Watch fan filmed highlight clips from YouTube.

30 Seconds to Mars, Linkin Park, Slayer, and Turisas performed at Download Festival 2007 on June 9th at Donington Park in Leicestershire, England. Check out pictures from FilmMagic, GettyImages, and WireImage.

Slayer frontman Tom Araya spoke with Australia’s Time Off magazine about how the heavy metal band has managed to stick together since the early ’80s. “It’s still the same, I don’t feel any older,” Araya said. “Our audience definitely has changed, though. I guess 25 years ago I wasn’t selling books at my kid’s book fair either, but 25 years ago I wasn’t married! I can’t say that the thought [of moving on from Slayer] hasn’t crossed my mind, but everything takes its course, and you have to allow everything to take its course. I don’t know how much longer the course has for us, but everything has to take its turn.” The article at timeoff.com.au has since been removed. 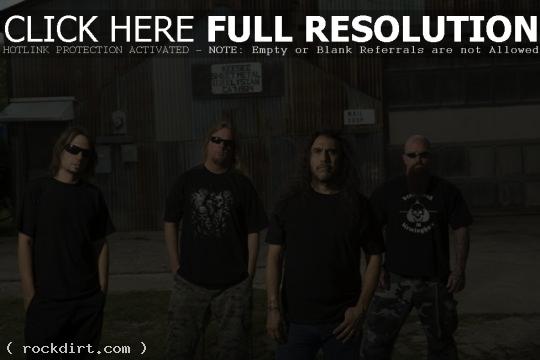 Slayer guitarist Kerry King is featured on Guitar World’s ‘Dear Guitar Hero’, where he responds to fans wondering about his beef with Megadeth’s Dave Mustaine, if he’s every wanted to do a solo project, where he puts his Grammy, and more. Watch the clips here.

Unearth and Slayer performed in concert at The Fillmore Auditorium on Wednesday (January 31) in Denver, Colorado. Check out pictures from WireImage (Slayer / Unearth).

Dave Buckner of Papa Roach, MxPx, Fieldy and James “Munkey” Schaffar of Korn, and Ronny James Dio were amongst the stars on hand for day one of the NAMM Show Convention 2007 on January 19th at the Anahiem Convention Center in Anahiem, California. John Tempesta of The Cult, Kerry King of Slayer, Abe Cunningham of The Deftones, As I lay Dying, Cradle of Filth, and DragonForce were amongst the stars attending day two. Check out pictures from WireImage (day1 / day2).