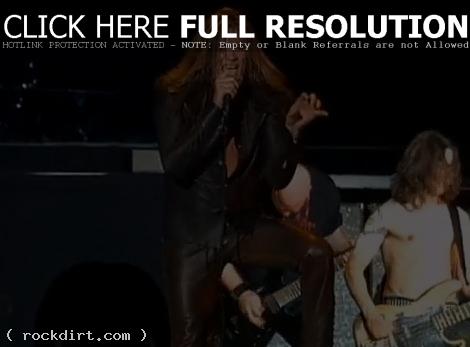 Sebastian Bach is out with the first video from his new solo album, ‘Angel Down’. The clip for ‘(Love Is) A Bitchslap’ is “a live performance video, filmed at the sold-out Calgary Saddledome and Winnipeg MTS Centre shows,” the ex-Skid Row singer explained. “The video kicks ass and I can’t wait for you all to see it!! The band is rockin’ and we played to over 40,000 of you people those two nights, so on behalf of the band, thanks for letting us star in YOUR video, Calgary and Winnipeg!!” Watch it at YouTube.

The rocker also said he has no contact with his former Skid Row bandmates, or just about no contact. “Just maybe Rob [Affuso], the drummer,” Bach said. “When you see the band Skid Row now, there are only two out of the five original members left in the band. Snake’s not even in the band! Snake manages Down now, he’s not even in Skid Row. So at what point does it become ridiculous? I mean, two out of five guys?” Read more.

Sebastian Bach released a lengthy statement to Blabbermouth.net in response to his interview with 93.3 The Bone in Dallas, Texas the other morning. “The DJ walks over to me, and the first thing she says to me is: ‘Well, we’re coming out of the commercial break, I have the Skid Row all queued up, we’ll come out of the commercial, go straight into Skid Row, and…’ There is only one problem. I am not in Skid Row. I was fired from the band in 1996,” Bach explained. “So I politely, but firmly, say, ‘I don’t want to play Skid Row.’ I have no problem with anyone playing Skid Row. But I don’t have to be there for it. The reason I flew to Texas, and drove here from San Antonio, is because I have spent seven years working on a new CD called ‘Angel Down’. Would it be possible if we could please play a song off the new CD?” Despite the uncomfortable start, Bach said, “It actually turned into a cool interview. I had a great time at The Bone.” Read more.

Cindy Scull and Robert Miguel of 93.3 The Bone in Dallas, Texas interviewed Sebastian Bach, and got things started off chilly with the former Skid Row singer by asking why he had waited so long to release his third solo album ‘Angel Down’. “It’s just like you… You just said to me that you’ve been playing my music for 20 years, and I walk in, and you’ve got a big Skid Row poster in my face,” Bach moaned. “It’s like, I’m aware of 20 years ago. And then you ask me why I spend so long making it… It’s like, I’ve gotta compete with this crap.” Bach said he was “tired of talking about the old days. It’s, like, boring to me.” Audio at myspace.com/scullandmiguel has since been removed.

With ‘Guitar Hero III’ being a huge seller, Van Halen reuniting, Guns N’ Roses’ ‘Appetite For Destruction’ celebrating its 20th anniversary, Sebastian Bach having a bit of a comeback, all things point towards a good year for ’80s rock nostalgia. Jill Dobson of Fox News Channel profiled the trend, talking with Slash and Bach.

Skid Row guitarist Scotti Hill spoke to Bacon Music from the band’s UK tour stop at Rock City in Nottingham, England on Saturday (November 24). Hill praised the UK’s crowds, the band’s latest album ‘Revolutions Per Minute’, its country material, developing a younger fan base, plans to release a follow-up, plans for a live/behind the scenes DVD and a live record, Dave ‘The Snake’ Sabo still being a member of the band but legal problems forcing him to remain in America, Ryan Cook filling in for Snake, Sebastian Bach’s claim the 2007 band is ruining the Skid Row name, getting early help from Jon Bon Jovi, being forced to the sidelines by the grunge movement in the early/mid ’90s, and more. Watch the interview below.

Sebastian Bach Gets A Hand From Axl Rose On ‘Angel Down’

Sebastian Bach is getting ready to release ‘Angel Down’ and the former Skid Row singer talked with Artisan News Service about his surprise when Guns N’ Roses leader Axl Rose said he’d help out. “I’m so happy with the record,” Bach said. “And to have him on it as well is so mind-blowing. I could not thank him enough. He’s helped more than anybody else in rock.” ‘Angel Down’, Bach’s first solo record in eight years, is released November 20th via a joint-venture between Merovingian Music, Ltd. (MRV) and Bach’s own Get Off My Bach Productions, and distributed worldwide through Caroline/EMI Music Group. Watch the clip at YouTube.

Former Skid Row singer Sebastian Bach was on hand for an in-store at Utopia Records on Thursday (September 14) in Sydney, Australia. The rocker later performed at Selina’s in the Coogee Bay Hotel. Check out pictures from WireImage (in-store / concert).

Australia’s The Metal Forge recently conducted an interview with former Skid Row frontman Sebastian Bach, where he talked about touring with Guns N’ Roses and hanging out with his buddy Axl Rose. “Axl throws these parties that would make Sodom and Gommorrah blush,” Bach said. “He’s like Caligula! He throws these incredible parties. In New York he did four shows at Hammerstein ballroom and threw these giant parties every night and everybody from Sean Penn to Lenny Kravitz to… I mean, you name it, they were there, just everybody famous just comes to see him play. It’s just a lot of fun, you know. Axl definitely knows how to throw a fu**in’ party, that’s for sure.”

The interview at themetalforge.com has since been removed.