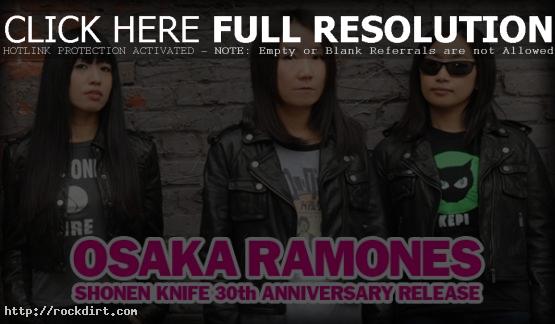 Shonen Knife have been the most internationally recognized name in Japanese Rock music since their entrance onto the alternative rock scene in the early 90s seeing them become the indie darlings of hipsters and rock stars alike. 2011 celebrates thirty years since Naoko and the band began releasing albums.

In celebration of the milestone, Shonen Knife is paying tribute to one of their biggest musical inspirations, New York City’s legendary Ramones. ‘Osaka Ramones’ is the name of the tribute album and the name of the side project which has made its way in and out of Shonen Knife’s performing history for decades. This East meets West punk rock combination is now captured in an album recorded and mixed between Osaka, JP and New York over the last year and was co-produced by Robby Takac of the Goo Goo Dolls.

The album, set for release July 19 on Takac’s label Good Charamel Records, will be supported by a North American tour. Dates will be announced shortly.

“Ramones were my all-time idols since I first heard their music from a radio and rushed to a record shop,” Naoko said. “This year is the 30th anniversary of Shonen Knife. For celebration, we decided to record a cover album of our favorite band the Ramones. The title is ‘Osaka Ramones’ with our respect. I’m very happy to release an Osaka Ramones project and to recognize their contribution to the evolution of Shonen Knife”

Marky Ramone of The Ramones and AntiProduct performed at Voodoo Lounge on Thursday (August 11) in Dublin, Ireland. Check out pictures from ShowBizIreland.

The world’s first punk rock musical ‘Gabba Gabba Hey’ will go on tour in Germany next week and fans of the legendary band the Ramones on Tuesday (May 3) had the opportunity to attend the dress rehearsal. Reuters.com has since removed the video.

May 8, 2005 rockdirt Uncategorized No Comments

Sonic Youth, Andrew W.K., Blondie, The Strokes and others performed at ‘Be Well – Ramones Beat on Cancer’ concert on October 8th at Spirit in New York City. Check out pictures from FilmMagic.

Jim Farber of the New York Daily News shared his memories of Johnny Ramone who died on Wednesday at the age of 55 due to prostate cancer. Farber revealed that several weeks ago, Ramone told him of his disease: “This is going to get me, I just don’t know when.” Farber writes, “To be sure, there are many sad things about the Ramones – not the least of which is that three of the four original members are now gone, and at such young ages. Joey died of lymphatic cancer in 2001 at 49. Dee Dee died of a drug overdose in 2002, also at 49. And now Johnny is gone. But at least he got to bask in the knowledge that his band showered the world with music too smart, funny, shocking and, yes, hard to ever fade away.” The full article at nydailynews.com has since been removed or relocated.

The New York Daily News reports Johnny Ramone, the guitarist and co-founder of the pioneering punk band from Queens The Ramones, died in his sleep yesterday at his Los Angeles home after battling prostate cancer for five years. He was 55.

Johnny Ramone scolded his friend Eddie Vedder after the Pearl Jam singer impaled a mask of President Bush and slammed it to the stage at a Denver concert last April. “I got serious with him and told him that he was alienating people,” Johnny tells the Washington Times. “And I got him to see the point.” The guitarist for the legendary Ramones has always been an ideological outcast in the left-leaning world of rock. The NRA-supporting Johnny calls Ronald Reagan “the greatest president of my lifetime,” listens to Rush Limbaugh and Michael Medved on the radio, and watches ‘The O’Reilly Factor’ every night.

Sex Pistols Frontman Rolls Rocks At The Hall Of Fame

Sex Pistols frontman Johnny Rotten bristled at John Soeder of the Cleveland Plain Dealer when mentioned abouit the city’s Rock and Roll Hall of Fame. “It’s the Hall of Shame – let’s be accurate,” Lydon said. Nominated in 2001 and 2002 for induction, England’s infamous Sex Pistols were snubbed by rock hall voters in favor of two other punk bands, the Ramones and the Clash. “It doesn’t bother me at all,” Lydon said. He dismissed Cleveland’s shrine to the rock ‘n’ roll elite as “a low-rent Las Vegas” run by “fat, useless, [expletive]-wits who don’t know anything about music.” Asked if he would attend the ceremony if his own group were inducted someday, Lydon replied: “Don’t be silly. Who cares? Really! Who created this preposterous penguin jet set of pop stars? It’s for tossers, mate. Look – I’ve been invited to do ‘Hollywood Squares.’ The center one, you know? And I turned it down. So what do I need from the Rock and Roll Hall of Shame?” Cleveland.com has since removed the article.