A new video previewing the computer game Fall Out Boy Trail, featuring bassist Pete Wentz playing the game, has been posted at the band’s YouTube channel. “Here’s a bit of a secret look at FOBoregon Trail,” Wentz writes. “The music’s so funny as if everything else in it. There are codes for Perez Hilton and Jason Tate. its been fun working with programmers so far. It’ll be out veryvery soon and will be free.” Watch it below.

Pete Wentz spoke with ‘Extra’ about the media scrutiny his sister in law Jessica Simpson has been receiving over her recent weight gain. “I think that the media puts too harsh of a spotlight on women in general and I think it’s a bummer,” the Fall Out Boy bassist opined. “It’s bad for young women. I see it affecting young girls who come to our shows and that’s a bummer. Real beauty is on the inside, man.”

Pete Wentz shared his thoughts on the challenges Barack Obama faces as U.S. President now that he’s no longer perceived as an underdog, a challenge Pete says he has experienced. The Fall Out Boy bassist writes:

As he begins to translate campaign promises into actual leadership and the business of governing, Obama now has an interesting challenge. Much like an indie filmmaker or an underground rock band, he was an underdog and he had the people’s support because of it. Everyone was rooting for him as they would David in his battle against Goliath. America loves an underdog. The Cubs are living proof of that.

But a funny thing happens when the underdog wins (trust me on this one, I have scratched and won one of the biggest lottery tickets that a goofy little Midwestern guy like me can get away with). The elation is high, but so are the expectations. Now there is a rapt audience. There is a microphone hissing, and feedback. When that happened before it was quaint and authentic. Now it’s annoying and unprofessional. Now the challenges that our nation faced in November have been compounded. There is a recession, there is war, there is a mounting unemployment rate. And there is history to be made. Now he’s no longer the underdog. He’s the leader of the free world with big ideas and big responsibilities. Now everyone expects results.

KIIS-FM DJ JoJo Wright got snow sledding lessons from Pete Wentz in the Fall Out Boy bassist’s backyard, with Pete holding JoJo’s daughter Sophie. Pete also talked about the biggest wipeout he had on a sled while in Chicago. They apparently shipped in some snow for Christmas. Watch footage below.

Pete Wentz apparently caught a lot of heat from his wife Ashlee Simpson after telling Howard Stern that the first time he and Ashley had sex. “It was the single best sexual encounter I’ve ever had,” the Fall Out Boy bassist said. “We were in the Soho Grand Hotel, and there was a mirror, and I was like, ‘Oh my God, you’re banging the girl of your dreams and you’re watching it right now.'”

Well during a subsequent concert at the Great American Music Hall in San Francisco, Wentz told the audience, “My wife said, ‘I’m gonna pay you back you fu**ing a**hole. I’m like, ‘Yeah, right, sure, pay me back. Cool. Whatever. Don’t do my laundry for a week.’ And she goes, ‘You know what, actually, I’m gonna go on fu**ing Howard Stern… Actually I’m gonna go on Channel 104.9, and I’m gonna say something just like this – I slept with someone from Fall Out Boy, and [unintelligible]…” Watch it below.

A Christmas Album From Pete Wentz?

Hollywood.tv caught up with Pete Wentz in Los Angeles at The Grove, asking the Fall Out Boy bassist if he’d ever thought about doing a Christmas album. “I thought about it but I don’t want to alienate any of my Jewish friends,” Wentz said. Asked about spending his first Christmas with baby son Bronx, Pete said, “I’ll answer if you all sing a Christmas carol for me.” Watch the clip via YouTube below.

Pete Wentz revealed that wife Ashlee Simpson’s breast milk tastes “soury” and “weird” on SIRIUS’ The Morning Mash Up! on Monday, though the Fall Out Boy bassist said their son Bronx is a fan. “The baby loves it, it’s the only thing he’s had a chance to have,” Wentz said.

Pete Wentz dropped by the Howard Stern radio show on Tuesday in New York City, where the Fall Out Boy bassist offered some details on his sex life with wife Ashlee Simpson. “We have an amazing sex life,” the 29-year-old said while promoting the band’s new album, ‘Folie a Deux’. “We have such sexual chemistry. If we had been on this show last year, we’d probably be doing it in the green room right now.” Pete added that he hopes the birth of their newborn son Bronx “doesn’t change it.” Check out a summary of his visit at marksfriggin.com.

Pete Wentz Apologizes For Fall Out Boy NY Sing Along

Pete Wentz blogged about Fall Out Boy’s failed effort to perform a free show in New York City in support of their new album ‘Folie A Deux’, apologizing for those who came out to only be able to participate in a sing-along, since the band apparently faced arrest if they used instruments. The bassist writes:

I genuinely feel sorry that we weren’t able to play today. They said if we picked up a guitar we would be sorry. Patrick said it best ‘it felt like the Grinch and the Whos’. But we knew this probably was gonna happen. We didn’t go through the proper process cause we wanted it to be free and fun and spontenious. So it was our fault. Anyway, thanks for singing with us. Well make it up to you. it means alot that you even showed up.

Watch the sing-along to ‘Where Is Your Boy Tonight’, which Pete notably didn’t participate in, below.

And Now A Message From Pete Wentz And Cassadee Pope 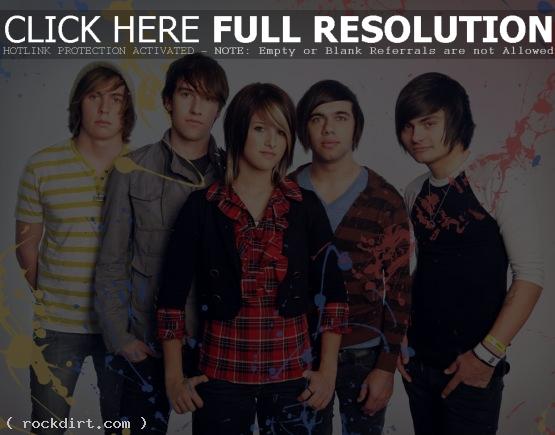 Fall Out Boy bassist Pete Wentz and Hey Monday singer Cassadee Pope checked in together in a video post at FOB’s YouTube channel, where Pete had trouble remembering the title of Hey Monday’s new album ‘Hold On Tight’. Watch the clip below the cut. END_OF_DOCUMENT_TOKEN_TO_BE_REPLACED