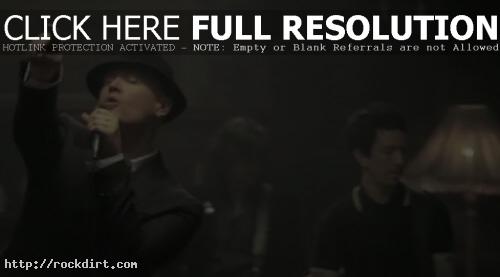 Hollywood indie rock act Orson are out with the video to their new single ‘Ain’t No Party’, off the band’s sophomore album ‘Culture Vultures’, out October 22nd in the UK. Watch it via Vimeo below.

The Extra Venue’s Q Jumper was on hand for the Orson git at Kentish Town Forum in London, England on October 18th, looking for the band’s biggest fan. Emma beat out Steve in a pie eating contest for a chance to meet the band. Watch the segment via Yahoo! Music UK & Ireland below.
END_OF_DOCUMENT_TOKEN_TO_BE_REPLACED

Orson performed live at The Forum in London, England on Wednesday (October 18). Check out pictures from FilmMagic.

Orson performed live at the Koko in Camden on July 25th in London, England. Check out pictures from PRPhotos.

Orson are out with the video to their new single ‘Happiness’, from the album ‘Bright Idea’. Watch it via YouTube below.

Popworld caught up with the guys from Orson in a Q&A, and asked the group what’s the worst job each had ever had. Frontman Jason Pebworth responded, “I once worked in a factory making pinatas, that was pretty rubbish. I just had to spend all day making models of Shrek and other characters out of chicken wire and sticking tissue paper to it.” Guitarist Kevin Roentgen offered, “I think it sounds like the coolest job in the world.” Bassist Johnny Lonely said, “He used to fill the pinatas up with vegetables so when the kids smash it all they get is vegetables and no candy. It’s more nutritious.” And rhythm guitarist George Astasio said, “I used to work in a tire factory, just watching tires rotate all day.”

Orson performed in concert on Thursday (May 25) at Koko in London, England. Check out pictures from FilmMagic.

Orson performed in concert at the Manchester Academy 3 on Sunday (February 19) in Manchester, England. Check out pictures from WireImage.