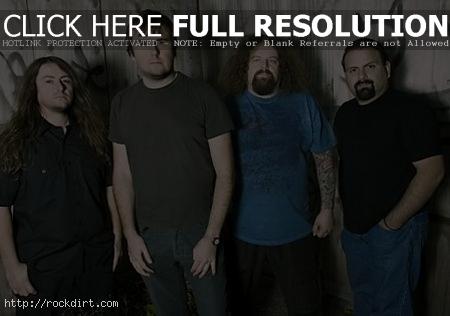 Century Media Records has renewed their deal with Napalm Death. Commenting on the re-signing, Jens Prüter (Head of A&R, Century Media Records) commented, “Napalm Death is not only one of the most important and influential extreme metal bands, they are also a band that always raises their voice against social ills – and even against record companies (remember ‘Enemy Of Music Business’). Therefore I’m even more glad about Napalm Death re-signing to Century Media for more great albums of intelligent and meaningful noise. And have you ever seen a weak Napalm Death show? I haven’t, and I have seen them MANY times and will never get tired to see them again and again. Thanks to Mitch, Danny, Shane and Barney for their resilience and resistance – and a special thanks to Marc from MAD for fighting on their side.”

Napalm Death vocalist Mark ‘Barney’ Greenway remarked, “We’re very happy to be re-signing to Century Media. In fact, I think it’s the first time we’ve actually re-signed on a longer term deal with anybody since the days when we didn’t strictly know that we could be digging ourselves a big hole with labels… It’s important for Napalm to stay with an independent, and Century proved to us with their overall enthusiasm and attention that this is where we needed to be. There’s a perfect balance of getting the band out there in people’s faces whilst still understanding the point that not everything is acceptable or ‘ethical’ promotion. It’s more like working with friends who actually care, and who could argue with that?”

The British grindcore band finished recording their upcoming fourteenth studio album earlier this year at Parlour Studio in Kettering, England with long-time producer Russ Russell, and they are currently on the road in Russia. Napalm Death will also tour extensively in Canada in October and will appear at 2012’s Maryland Deathfest.

Napalm Death are set to release their new album ‘Time Waits For No Slave’ on February 2nd via Century Media, and ahead of the release, a track by track discussion is available at the label’s YouTube channel. The latest clips feature singer Barney Greenway speaking about the concept and meaning of ‘Strong-Arm’ and ‘Time Waits For No Slave’. Watch them below.

Napalm Death ‘When All Is Said & Done’ Video

Napalm Death are out with the video to their new single ‘When All Is Said & Done’, from the album ‘Smear Campaign’. Watch it via YouTube below.