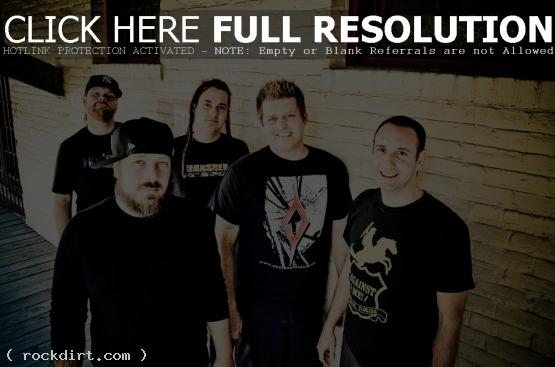 Rockerrazzi.com caught up with Less Than Jake’s Vinnie Fiorello backstage at the 2009 Vans Warped Tour in Pamona, California on Friday (June 26). The drummer talked about enjoying the California sun, how the band got started, why Florida is home to so many bands, how he wants to be remembered, the key to their longevity – a brotherly love/hate, and peeing in a cup before every gig. Watch the interview below.

Less Than Jake are out with the live video for ‘National Anthem’, recorded in Australia. The song originally appears on the veteran Gainesville, Florida ska punk band’s ‘B Is For B-Sides’ album. Watch it below.

Less Than Jake Take Their Time 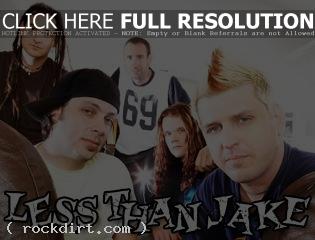 Spending time in preproduction and developing ideas for songs in a more natural manner is something Less Than Jake recently adopted, trombone player Buddy Schaub tells Australia’s Time Off magazine. “We took a lot longer to work on the writing aspect of the record,” he explained. “In the early days we’d just tour, tour, tour and then it was like, ‘OK, time to do a record!’ and we’d some of the songs written and we’d go into the studio. It was a real rushed atmosphere. At some point we decided to just take off a little bit, write and clear our heads for a little while, take some time to ourselves, and then start writing. Then [we’d] take a little time off, tour and try the songs out, come back and rework them.” The article at timeoff.com.au has since been removed.

Less Than Jake ‘Overrated (Everything Is)’ Video

Less Than Jake are out with the video to their new single ‘Overrated (Everything Is)’, from the album ‘In With the Out Crowd’, out May 23rd. Watch it via YouTube below.

May 8, 2006 rockdirt Multimedia No Comments 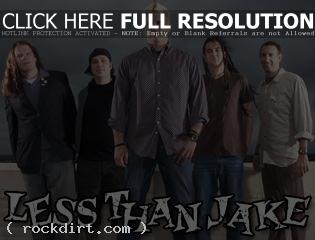 A media player for for the upcoming Less Than Jake EP ‘Absolution For Idiots and Addicts’, out May 23rd, has been posted online. It features the new single ‘Let Her Go’, as well as ‘The Rest Of My Life’, ‘A Still Life Franchise’, ‘Overrated (Everything Is)’, and ‘Soundtrack Of My Life.’ Also included is a live video for ‘Overrated (Everything Is)’.

The player at warnerbrosrecords.com has since been removed.

Less Than Jake Perform In Plymouth

Less Than Jake performed in concert on Tuesday (April 11) at Plymouth Pavilions in Plymouth, England. Check out pictures from WireImage.

Less Than Jake, Linkin Park, and The Used performed during the Projekt Revolution Tour at the Tweeter Center on Saturday (August 7) in Chicago, Illinois. Check out pictures from GettyImages.

Less Than Jake Getting ‘Old’ In Late 20s

These days, Less Than Jake are in their late 20s, having been around as a band for over a decade now. “Yeah, we’re old,” Happy JR tells Australia’s Beat magazine. “It’s a little bit harder to get out of the bunk without being really sore. But I’m 27 now and I do feel better, physically. And when I play I’m more confident in what I do. With stuff like that, it’s good to get older because you become more experienced and more comfortable in who you are. There’s none of those weird teenage anxiety attacks that happen when you’re a kid. It’s good to get old. Don’t fight it.”

Darker Less Than Jake Is Sign Of The Times

Sean Richarson of the Boston Phoenix chatted with Less Than Jake drummer Vinnie Fiorello about their new album ‘Anthem’, and how the lyrics have become darker than the traditional offerings from the group. “The lyrics on the record are very autobiographical,” Vinnie stresses. “Lots of our fan mail comes from dudes in the military, and when buildings are getting blown up, it’s not a joky time. When the national psyche is a bit dark, how are you going to do a whole record of songs like [the Less Than Jake standard] ‘Johnny Quest Thinks We’re Sellouts’? We wanted something that was dark and anthemic at the same time.” The full story at BostonPhoenix.com has since been removed.