Dimmu Borgir are out with the video to their new single ‘The Chosen Legacy’, off the Oslo, Norway metal band’s seventh studio album ‘In Sorte Diaboli’, out now on Nuclear Blast Records. Watch it via YouTube below.

Dimmu Borgir, DevilDriver, and Unearth performed at House of Blues in Chicago, Illinois on Wednesday (May 2). Check out pictures from PR Photos (DevilDriver / Unearth / Dimmu Borgir). Watch a fan filmed highlight clip below.

May 5, 2007 rockdirt Multimedia, Photos No Comments 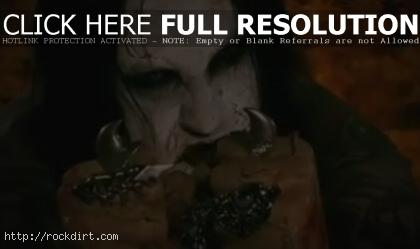 Dimmu Borgir are out with the video to their new single ‘Sorgens Kammer – Del II’, one of the new tracks included on the updated, re-recorded version of their 1996 album, ‘Stormblåst’. Watch it online below.

Judas Priest, Slayer, and Dimmu Borgir performed as part of Ozzfest 2004 at Shoreline Amphitheater on Thursday (July 29) in Mountain View, California. Check out pictures from GettyImages.

Members of Lamb of God, Judas Priest, Slipknot, Slayer and Dimmu Borgir appeared for the Ozzfest 2004 press conference with Ozzy Osbourne on Friday (February 20) at Avalon in Hollywood, California. Check out pictures from WireImage.

Jason Bracelin of the Cleveland Scene chatted with Norway black metal band Dimmu Borgir guitarist Silenoz about how his band, unlike many in the black metal ilk, doesn’t take themselves too seriously. Borgir said, “In the early ’90s, everything had to be so fu**ing dark, you had to be silent all the time and couldn’t show a fu**ing smile. But that passes, once you start to grow up and you experience new stuff in life. Now we’re taking the rebellion to a more intelligent level, and we use the music as a weapon instead of fu**ing torches and gas. It makes you open your mind.” Clevescene.com has since removed the article.