Bret Michaels ‘What I Got’ Video (Holiday Version) 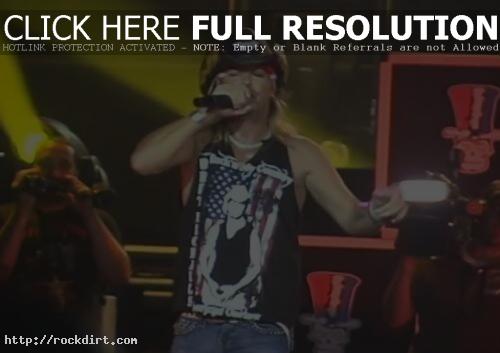 Bret Michaels premiered the holiday version of his ‘What I Got’ music video on Thanksgiving Day. The video is a special tribute to all of the Poison singer’s supportive fans. The song is featured on Bret’s latest album ‘Custom Built’, out now on Poor Boy Records. Watch it via YouTube below.

Bret Michaels Talks About The Night Of His Brain Hemorrhage

Bret Michaels visited the ‘Today’ show to talk with Kathy Lee Gifford and Hoda Kotb to talk about his new reality show ‘Life As I Know It’ on VH1 and how medically it’s been the worst year of his life, but otherwise great. “The night I had the hemorrhage, you don’t think about a lot because I was in so much pain,” the Poison singer explained. “That’s what’s going on. I didn’t have one of these things where I went through my life and all the stuff. What happened was I got really sad, when they say bring your kids to the hospital this could be it, you have a brain bleed, that’s the moment life goes in perspective. I’m just so happy to be here and living like I’m dying.” Watch the interview via MSN.com below.

Bret was my top choice to host this year’s Miss Universe Pageant, he really proved himself on ‘The Celebrity Apprentice.’ He is a certified rock star who has toured the world and now the universe shares the stage with him,” said Donald J. Trump. “Knowing Bret, I am confident anything can happen and the ratings will be through the roof!

John Legend will set the tone for the evening as he performs with The Roots. Orianthi is also set to perform at the event that will take place at the Mandalay Bay Resort & Casino in Las Vegas on August 23 (9-11 p.m. ET) on NBC.

Bret Michaels recently stopped by ABC’s ‘Nightline’ to reveal the songs that top his personal playlist. Find out what music Bret holds close to his heart and who ranks number one amongst the classics such as Kiss’s ‘Rock and Roll All Night’ and The Sweet’s ‘Ballroom Blitz’. Watch the full interview via Hulu below and check out the Poison singer on August 23rd as he co-hosts the Miss Universe live from Las Vegas at 9 PM on NBC.

Bret Michaels recently joined Jimmy Buffett on stage in Detroit, Michigan to perform the fan favorite ‘Margaritaville’. The two musicians share the stage and vocal responsibilities as the onlooking crowd sang along. Watch the video via Bret’s YouTube channel below.

Bret Michaels sounded off on life, love and his new CD ‘Custom Built’ in an interview with CNN’s Denise Quan. Asked about when he had time to do the record, given his medical situation, touring and ‘The Apprentice’, the Poison frontman said, “The new album, ‘Custom Built’, we started working on long before I got sick. The album was originally supposed to come out in March or April, and then I got sick. Not only does it have a bunch of brand-new, original material — it also has my song, ‘Every Rose Has Its Thorn’. I did a real rootsy, kind of cool version of that on here, and then I redid a Sublime song called ‘What I Got’. Its lyrics are relevant in my life: ‘Love is what I got, so remember that.'” Watch the interview via Turner.com below.

Bret Michaels Makes The Case To Be Simon Cowell’s Replacement

‘Celebrity Apprentice’ winner Bret Michaels visited ‘On The Record with Greta Van Susteren’ the other night to discuss his health since the brain hemorrhage, his new CD ‘Custom Built’, football, the possibility of being an ‘American Idol’ judge and more. “I really think I could deliver a great job,” the Poison frontman said of the possibilities of replacing Simon Cowell. “The one thing is I’ve truly lived it from the ground up… I’m not quite as brutally honest as Simon is, but Simon is an original, and he brought brutal honesty. I think I could give them a good, honest answer both on the passion of music and the most important thing, navigating the business of having a long career.” Watch the interview via FoxNews.com below.

Bret Michaels And His Doctors Respond To Medical Condition Speculation

Dr. Joseph Zabramski, MD, Bret’s neurosurgeon at Barrow Neurological Institute states, “The fact is, the subarachnoid hemorrhage that Mr. Michaels suffered was very real, and very serious as was the T.I.A (warning stroke) and P.F.O., which will be operated on later this year. A subarachnoid hemorrhage is a life-threatening, neurosurgical emergency that requires an extensive work up and management in the ICU to prevent re-bleeding and manage the complications associated with the initial hemorrhage. For anyone to speculate that this was not a life threatening medical emergency is absolutely incorrect. Between 15 and 20 percent of patients die as a result of the initial hemorrhage, and only approximately 50 percent of those that survive have a good outcome. Recovery from subarachnoid hemorrhage is determined primarily by the size of the initial bleeding episode. Mr. Michaels quick reaction to the hemorrhage and immediate medical attention that followed aided in his ability to make a strong recovery and stop the brain hemorrhage before it caused severe and permanent brain damage. Mr. Michaels is fortunate to be alive after all that he has been through. Bret is truly one of the most determined individuals I have ever met when it comes to an attempt at making a full recovery.

Dr. Greg Gonzaba, whose team treated Michaels for the appendicitis in San Antonio. states “When I arrived I found Mr. Michaels to be acutely distressed, upon my examination I concluded he was suffering from an “acute abdomen”, a medical diagnosis suspicious for a serious, potentially fatal abdominal problem, such as appendicitis, cholecystitis or possible diverticulitis. These conditions, if left untreated could escalate to a potentially fatal problem such as organ rupture, sepsis/toxicity and eventually death by overwhelming infection not to mention Mr. Michaels is a diabetic which could complicate the condition. For a news source to assume and state his condition was not serious is completely false and irresponsible.”

In recent months Bret Michaels’ health issues and determination to recover and continue touring have been viewed as both inspirational by some and as potentially jeopardizing to his health by others. Michaels, a lifelong type 1 diabetic, had an emergency appendectomy, a brain hemorrhage, a T.I.A (warning stroke) and was diagnosed with a P.F.O (hole in his heart). This domino effect happened over the course of a month and a half. Although Michaels is not 100% yet his fight to recover both physically and mentally combined with continued lab work including blood tests MRI’s and physical’s, 4 daily insulin injections along with 2 daily Lovenox injections to thin the blood will be continued until he is able to have the operation on his heart in the fall “

Janna Elias V.P. of Michaels Entertainment states “All people heal differently and while Bret may be out on the road and performing he is still not 100%. He still has pain from the chemical meningitis, short term memory loss and gets fatigued quicker than normal. Bret isn’t by any means trying to put his health in jeopardy by being on the road. He simply feels that music is a powerful healer. For Bret to sit around and not live his life to the fullest would likely be more detrimental to his recovery then playing music, it is the same mind set as the lyrics to Tim McGraw’s song “Live like you were Dying.””

Bret Michaels has been released from the hospital after suffering a brain hemorrhage April 21st, as the Poison frontman begins his road to recovery. “Mr. Michaels was indeed a lucky person, a very lucky person,” Dr. Joseph Zabramski told reporters Tuesday at the Barrow Neurological Institute at St. Joseph’s Hospital in Phoenix, where Bret received treatment. “I really expect that he will fortunately make a 100 percent recovery. He’s just one of those lucky people – 10 to 20 percent who make a complete recovery and can resume all of their normal activities.”

A rep for Bret Michaels confirmed to E! News earlier today the 47-year-old Poison frontman was rushed to the hospital just before midnight after complaining of an excruciating headache. Doctors found a massive subarachnoid hemorrhage—bleeding at the base of his brain stem. Bret remains in intensive care. “We will have no additional information until further testing is done,” his rep said.