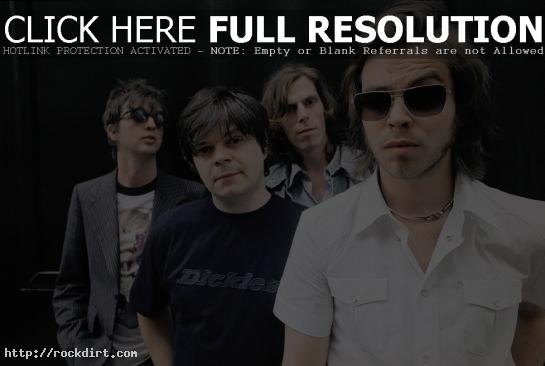 In the never-ending quest for credibility, Supergrass have been dogged by the ubiquitous ‘Laddish’ tag due to a combination of beards and brilliantly ‘quirky’ videos. Does this weigh on them after ten years? “Well, hopefully on the next record we’ll have, it’s my dream to move on from that; it’ll probably not be quirky but have a coolness to it that we perhaps haven’t had before, that kind of, not integrity or credibility, but less jokiness to it,” bassist Mick Quinn tells Australia’s Beat magazine. “But then I dunno, I’d like to move on and progress, and hopefully, having done this retrospective, the next album allows us to go on and become a different kind of band. It’s a very tall order, but you know, we may go for that. For the next record we’re setting up our own studio, and doing it all quite lo-fi. It’s quite loose in terms of the musical direction, we’re not using a producer this time round, and we’re just basically trying to build a studio from scratch, coz [vocalist] Gaz [Coombes’] got a little house Normandy that he bought a few years ago. So we’re gunna go to Northern France for a few months and see what happens. It’ll really loose, because we’re gunna write it at the same time as we’re recording it, so it’ll be quite chaotic, but it should be good fun.”