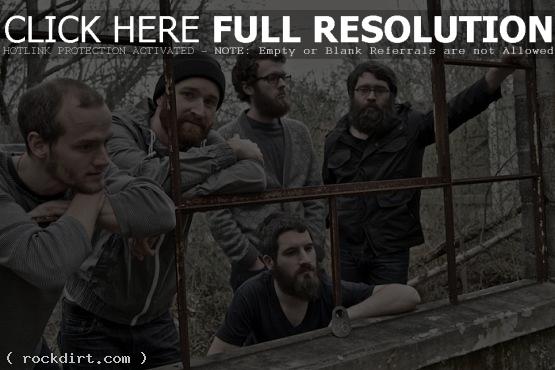 Autumn + Colour Records announced the signing of Atlanta’s Sleepy Turtles to their roster. The band first came together to create a soundtrack for a novel entitled ‘The Emblem & The Lantern’, written by vocalist/guitarist Dylan Higgins, who then decided to keep making music using a moniker which came from a chapter title in said novel.

Consisting of Higgins, Tim Friesen, Will Parker, Marcus Trail and Mike Vanklaveren, Sleepy Turtles create songs, simplistic in frame, but broad in context, threaded in the old tradition of folk. Their music creaks with the thaw of an old church pew, drawing joy in wandering harmonies and stories that are sewn by hands covered in earth, filling the bones of the songs as ambiance backlights the fluttering travels of shared existence. “We hope to portray through the music,” Higgins explains, “that all of us are a part of the same journey.”

The band will enter the studio to begin tracking and mixing their debut record with producer/engineer Jeff Malpass at Marigolds+Monsters Studio. Their new five song EP ‘Summer, Hither’ is set to release in early Summer 2012.

Fans of Sleepy Turtles can download a free copy of their previously unreleased EP ‘Brother, You’re So Kind’ for a limited time on Noisetrade.