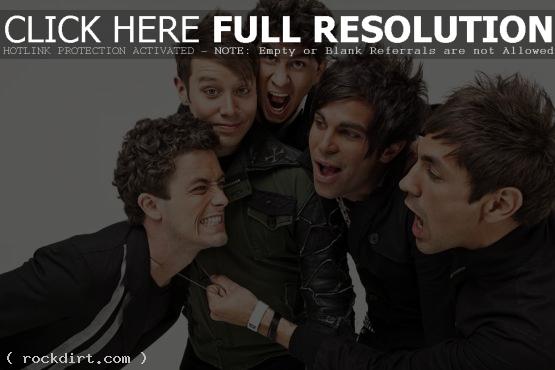 The self titled debut from Runner Runner is available now. The album is currently streaming in its entirety on the “music” tab on the bands official Facebook page. Their latest song, ‘Hey Alli’, is currently the single of the week on iTunes and is a follow up to their debut single, ‘So Obvious’, which charted on the Top 40 radio airplay charts.

Runner Runner is currently on tour with The Pretty Reckless, which kicked off Friday (February 11) in Los Angeles and is running through the middle of March. Immediately following, the band will jump on tour with A Rocket To The Moon which runs through the end of April.

A statement from the band about the release of their new album has been released by the band. Read it below the cut.

Street Date and what it really means.

We wanted to explain some things to you all and though we have had incredible fun the past months and it’s truly an honor to communicate with you all daily, it’s time to get serious for just a second. We’ve always been open and honest with you and will continue to be that. You all really need to know how amazing it is to us that you like our music and care to even bother to communicate with us. For us knowing you’re there is the biggest thrill and the greatest reward. It’s pretty intense and our appreciation is endless.

The music business has changed over the years. Years ago a band would get a record deal and they had until their third album to become a success, or not. Then something weird happened. The cost of doing business became greater but sales started going down. The loss of sales are due to a lot of things like music not being part of people’s lives they way it used to be, people having more entertainment options, and of course piracy and illegal downloading. All of that now made it impossible for a band to have three records before their fate is decided. Today that fate is decided on the first album, sometimes the first single and most importantly in the first week sales.

It used to be three strikes you’re out, or in. Now it’s hit the homerun first time at bat or you’re off the team.

Somehow the public got the idea that the record company is the big bad wolf. That’s just not true. Record companies have thousands of really hard working, dedicated and passionate employees who day after day work as hard as they can to bring new music to the public. Those employees are judged as well by a bands success. Those same employees have bills to pay, families to feed and they certainly don’t want to fail. The costs of launching a record is astronomical, the investment from that big, bad record company can run into the millions of dollars, for real. So a company that invests that kind of time and money can’t be as bad as the public thinks they are. We don’t know who started that idea but it’s just not true.

Since Soundscan came around the emphasis on first week sales has become the end all, be all. Like the opening weekend of a movie, the success of a band or movie is judged on that first week, not the long run. Think of some of the great movies you discovered on cable or DVD and wondered why they didn’t succeed in theaters. We bet it was because that first weekend box office number killed it prematurely. We’d also bet you have great music in your collection too that no one knows but you and a few friends.

Coming up on our street date for this album, we want to say that no one deserves to get paid to do something they love. No one can really justify that. In a world of extreme poverty and terrible economics, with the unemployment rate so high and even more frightening, countries having kids die for lack of water and food, no one, and we repeat no one, has a right to belly ache about paying dues and the hardships of touring in a van or not getting a soundcheck. Seriously. So we don’t deserve the success we are humbly asking for when looked at in that light.

This is the career we chose and because it became our career we have to play by its rules and the rules are pretty simple: we have to have enough success for it to make sense for the record company to continue investing time and money in our project. Pretty cut and dried, plain and simple. It’s like any other business and we understand and appreciate that. They need to see a reason to continue and we need them to help us continue.

You probably know what’s coming up next and please understand it as honesty, not a scam to get you motivated or begging. Well maybe it is begging a little but we never have a problem with telling the truth. We understand the economy sucks, we understand you may not have any money, we understand your families may be in deep financial trouble. We get that and hope your life changes for the better as soon as possible. But if you are not in that situation, we need your help this week.

If you have any desire to get our album, please do it and if you can, please do it this week. That critical first week number scares us. If you don’t have the means to do it, we understand and love you anyway. We need the help and are not ashamed of that. We usually ask for it in a comedic way, so forgive this change of pace.

If fate decides the dream is over, so be it. We will continue to make music and consider ourselves blessed and lucky. It’s been an amazing ride so far and the best part has been all of you. Some of you we communicate with on our social sites like Facebook, a lot of you we have met at shows and different events. You truly don’t know how it feels to have people like something you do. It’s just the most tremendous honor. We are just trying to explain the business side and why we’re a little freaked out right now.

We have been saying we don’t have fans, we have friends. In this open letter we are talking to our friends and we hope you understand why we are.

Thank you all so much from the bottom of our hearts for being there. Much love and respect, Ryan, Peter, Nick, Jon and James. Those guys in Runner Runner.

«A Loss For Words Sign With Velocity/Rise Records
Does It Offend You, Yeah? ‘The Monkeys Are Coming’ Video»