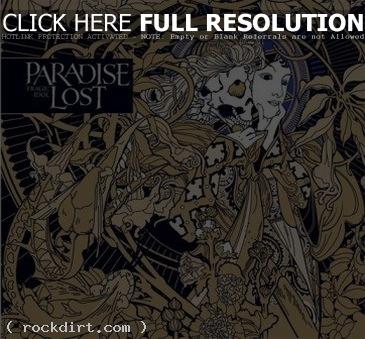 Paradise Lost have now revealed the cover artwork for their new studio album ‘Tragic Idol’, set to be released on April 23rd in Europe and April 24th in North America via Century Media Records. ‘Tragic Idol’ features artwork designed by Parisian artist Valnoir, who also has worked with artists such as Morbid Angel, Ulver, Watain, and more than 150 others.

In support of the album, the English heavy metal band will be touring the UK this April. To celebrate the event, Paradise Lost will have a very limited number of VIP tickets available (10 per show), which can purchased online from the band’s official website. In regards to the tour, vocalist Nick Holmes said, “This is a pretty extensive UK tour for us, I’m speechless and excited. It’s nice to know there’s a WH Smith in every town we play.”

Joining Paradise Lost on this European run is Finnish melodic death metallers Insomnium. The dates are as follows: