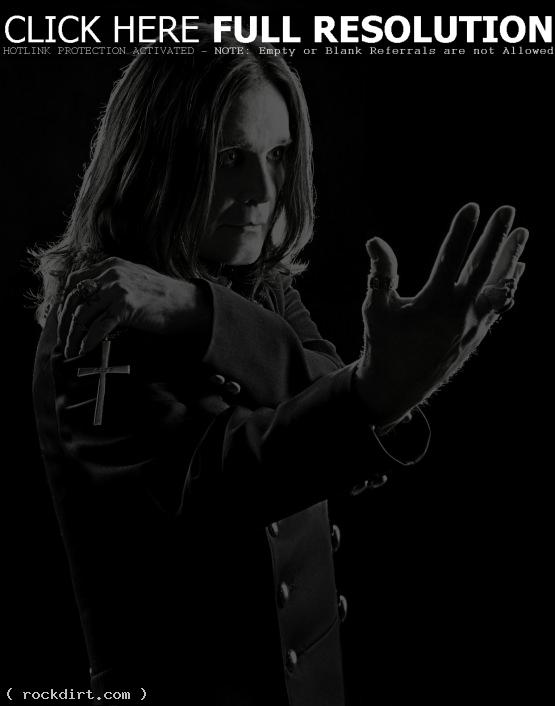 Carson: Let’s get this started. Our first guest is one of the
founding members of black sabbath. He is a legend of rock ‘n’ roll, and
he’s kelly and jack’s dad. He’s right over there, the prince of — darkness
— ozzy osbourne.

Carson: What’s happenin’? Thank you for being here.

Ozzy: Good to be here.

Carson: What have you been doing? You been working out?

Carson: Life is boring for you.

[ Laughter ] What vices do you have left?

Carson: Now more than ever, I understand.

Carson: How is she?

Carson: She’s a sweetheart. So “the osbournes,” the show, now, at mtv
has come to a conclusion. It’s done. Do you miss the cameras?

Ozzy: Well, actually, it was done awhile ago. But last weekend, we had
to do the very final show. And all the old camera guys came back and the
producer and whatnot. And it was — I realized how much of a family we’d
become over the years that we were filming.

Carson: Yeah, yeah, yeah. They were there all the time.

Ozzy: But I can’t watch the show. ‘Cause it’s kinda creepy when —

[ Light laughter ] And that’s the truth.

Carson: Why didn’t you watch more of it?

Ozzy: I’m weird at watching myself on tv. I wanna go, “straighten up.
Talk right,” you know?

Carson: Yeah. Well, it was an excellent show. You’re very, very good
at it.

Carson: No, you were very good —

[ Laughter ] Why did they get dr. Phil for that last episode?

Ozzy: That’s true, ’cause he — he’s kinda — when you’re talking to
him, you kinda understand him. But then you go, “what did that mean?”

[ Imitating dr. Phil ] “Your family is quite weird, the way y’all swear
so much, ozzy.”

Ozzy: You sound like him, but you got hair.

Carson: Yeah, but I got hair. That was a weird show to watch, though.
How are the kids?

Ozzy: Great. Kelly’s just coming out with a new dance record. And she’s
just done a video, which is fabulous. Jack’s out doing this extreme sports
things, where he rock-climbs, goes in cages underwater with the great white
sharks. He’s, like, going through that nutty period. He’s doing it for
a british television network.

Carson: And we have the 10th anniversary of ozzfest.

Ozzy: I can’t believe it.

[ Cheers and applause ] When you go out now on ozzfest, I mean, how
does that even remotely compare to the days when you went out on the road
with black sabbath?

Ozzy: A gig’s a gig. It’s like — I like to say that it’s an invisible
line. When you cross that line, you’re on. And no matter what god sends
down, you’re gonna do, anyway, you know.

Carson: Right. Do you enjoy touring now, though? Or is it —

Carson: Right. It’s probably always been that way. When you weren’t
on the road, you wanted to be on the road.

Carson: That’s something that never leaves you, I guess.

Ozzy: But I’m never happy. I’m always bitching and moaning at my wife.

Carson: Yeah. And the other bands? Is there anything special for the
10th anniversary of ozzfest?

Carson: Sharon? Could you yell for her? We need her out here.

[ Laughter ] We — she’ll be here in a second, I’m sure. We’ve watch
kelly and jack pretty much grow up on camera, by watching the series on
mtv. What was little ozzy like?

Ozzy: I used to do things normal kids do. Set fires and —

[ Laughter ] Shoplift and sniff glue and — you know. I was a normal
kid.

[ Laughter ] That’s the thing about dr. Phil. When he was on the show,
he said, “you know, y’all are so dysfunctional.” And I thought — and then
you kinda chimed in there and said, “well, what’s functional?” I mean,
sharon, and I know the kids — you’re a loving family.

Ozzy: When your kid’s sick, you’ll go to any length to get the medication
for your kid. Or if your wife’s — I mean, I’m very fortunate that I got
successful. But when I was a kid, we had no money, no car. We had very
little of anything, you know. And so, whatever I got, we all had to beg,
borrow or steal.

Carson: Right. Did you make it a conscious effort to teach jack and
kelly, ’cause they grew up a little more privileged than you did —

Ozzy: Well, I didn’t come — I’m not the regular dad. I didn’t come
in a police car or ambulance or through the window or some crazy — I’m
not your regular dad, you know.

Carson: They don’t seem to resent you for that.

Ozzy: Well, if you grow up in it, that’s normal to you. And, I mean,
people have the misconception that I lived in some kind of a bavarian castle
and slept upside-down off the rafters. That’s our summer house. But, you
know —

Carson: It’s a summer home. Here’s the box set. This is good-looking.
This has 52 songs, including some collaborations that you did. This is
the “prince of darkness” box set that you can pick up now. One of the things
that I thought was interesting is some of the collaborations you did. One
of them is with wu-tang clan and dmx.

Carson: Are you a fan of hip hop?

Ozzy: I’m a fan of all music. But sharon goes, “they want you to do
something with miss piggy, wu- tang clan, ‘staying alive’ with dweezil
zappa.”

Carson: Yeah. And what is this you’re doing now? With “rasputin” on
broadway?

Ozzy: Yeah, yeah, I’m just about two or three songs away from finishing
—

Carson: But this is gonna be a play? Who was rasputin? All I know about
rasputin, from what little I remember about history, is that he had a very
large manhood.

Carson: It’s on display in russia as I understand.

Carson: Yeah. Well, it’d be pretty cool, I think, to go see the play
on broadway and know that all the music to the story of “rasputin” that
you wrote — it seems like a good fit. Well, we’re gonna have to run here
in a second. But just quickly, because I know that you are up to speed
on what’s going on in music today — does it bother you at all that there
just seems to be sort of a lack of the rock star, speaking of rock star?

Ozzy: What bothers me, the lack of melody. I used to like hip hop. I
like it when they’re got the hip hop, you know, mixed in with a bit of
a melody. It’s better for my ears than just listening to guys —

Carson: So, guys that are just going super, super fast with no real
melody, that’s not necessarily your thing.

Ozzy: No. I like — I mean, the beatles were my inspiration from the
beginning. They always had great melodies.

Carson: I don’t know why sharon didn’t come out.

Ozzy: She’s — I don’t know. She’s probably in there, polishing her
credit card.

Carson: There you go.

[ Cheers and applause ] The “prince of darkness” box set is out now.
Get that.