On TV: Tokio Hotel, Panic! At The Disco, Thrice 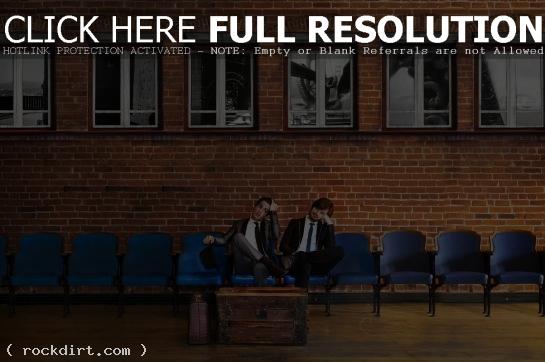 Jimmy Eat World, who perform on ‘The Late Show with David Letterman’ on Monday.

Thrice, who perform on ‘Late Night with Conan O’Brien’ on Monday.

Fueled By Ramen acts Panic! at the Disco, Cobra Starship, The Academy Is…, The Hush Sound, Phantom Planet, and The Cab, who all appear on ‘Total Request Live’ on Monday, while Panic! at the Disco makes another appearance on ‘The Late Show’ on Thursday.

Hayley Williams from Paramore, who visits ‘The Sauce’ on Monday and ‘TRL’ on Wednesday.

Your Vegas, who perform on ‘Last Call with Carson Daly’ on Tuesday.

Tokio Hotel, who perform on ‘TRL’ on Tuesday and ‘Late Night’ on Friday.

P.O.D., who perform on ‘The Tonight Show with Jay Leno’ on Wednesday.

Mike Doughty, who performs on ‘The Late Late Show with Craig Ferguson’ on Wednesday.

The Duke Spirit, who perform on ‘Late Night’ on Wednesday.

Barenaked Ladies, who perform on ‘Live with Regis and Kelly’ on Wednesday.

My Chemical Romance, who visit ‘The Sauce’ on Wednesday.

The Heavy, who perform on ‘Last Call’ on Thursday.

Ludo, who perform on ‘Jimmy Kimmel Live’ on Friday.

May 5, 2008 rockdirt TV Appearances No Comments Panic At The Disco, Thrice, Tokio Hotel

«We Are Scientists ‘Chick Lit’ Video
Who’s Next: Your Vegas»