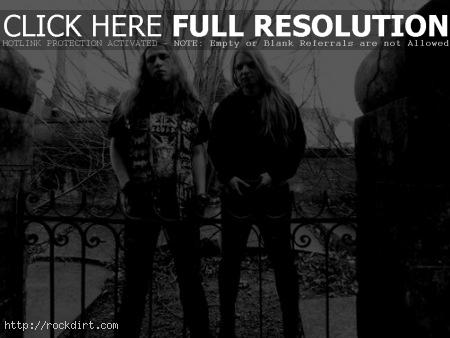 Century Media Records announced the signing of Necrowretch from France. The young death metal band combines influences from the early works of bands such as Merciless, Morgoth, Grotesque and other acts with their own vision.

“We are of course very happy and proud to join the Century Media Records family in which we already feel really comfortable! We are convinced that this collaboration is for us a unique chance to work in the best conditions with experienced and passionate people,” guitarist and vocalist Vlad commented. “We are now eagerly waiting to start working on our first unholy album. Finally, I would like to thank Jens Prüter, Philipp Schulte and Jerry Maréchal for their confidence and dedication!”

Jens Prüter, Head Of A&R at Century Media Europe, enthused, “It already surprised the metal scene that we signed the, back then, rather unknown band Sonne Adam from Israel. And I can just repeat myself: it’s about the unique quality and we have a history signing Death Metal newcomers. Bands like Grave, Morgoth and Asphyx had just a couple of demos out before we signed them over 20 years ago. Let’s continue with the next generation and welcome Necrowretch! The Putrefactive Infestation 12″ dominated my turntable for some months and I’m sure the upcoming album will be as sick and heavy! Bands like Massacra, Agressor or Mercyless can be proud that Necrowretch is carrying on the torch of French Death Metal.”

Jerry Maréchal, A&R at Century Media Europe, added, “It has been 4 years now that I follow the progression of the band and all I can say is that it has been truly impressive! From the first demo to the Putrefactive Infestation 12″, the 2 main characters behind the band managed to establish Necrowretch as a solid newcomer in the Death Metal field by transcending their excellent early 90’s underground influences while remaining faithful to what is genuine Death Metal. Hail to them!”

Necrowretch will start writing their first album after the release of their first 7″ EP on Detest Records. This 7″ will be released at Asphyx’s album release party on March 10th, 2012 at the Turock club in Essen, and it will be Necrowretch’s first German live appearance. The band will then perform at the Hell’s Pleasure Festival July 20th and 21st, 2012 in Pößneck, East Germany.