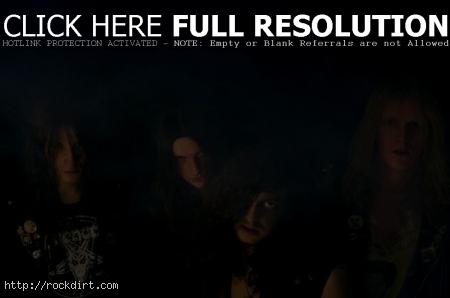 Century Media Records announce the signing of Morbus Chron from Sweden, which the label described as “one of the most talented and promising bands among all of the new traditional death metal acts that have been popping-up in the scene for over 3 years now.”

The band had this to say about their new label home:

Always expect the unexpected. Morbus Chron are thrilled to join the ranks of Century Media Records. We know that with greater assistance and sturdier tools, the more clearly we can focus our attention solely on the music. So it is with big smiles that we ink this deal tonight. To keep the momentum going, we’re entering Gutterview Studios in March/April to record our first 10″ EP. Expect to have us around for a while.

Coming from Sweden without sounding like the 9265465th clone of ‘Left Hand Path’ Entombed is not a sinecure, to say the least. What Morbus Chron has been achieving for more than 3 years and their first demo tape is far more impressive as the band manages to merge varied and classic influences ranging from US death metal to Swedish and Euro death metal with their own very personal conceptions, be it musically or aesthetically. The result is an intense and fascinating traditional death metal act. Period.

Morbus Chron will soon record new tracks for a 10″ vinyl to be released at their first live appearance in Germany at the Hell’s Pleasure festival July 20th and 21st, 2012 in Pößneck, East Germany along with label-mates Sonne Adam and Necrowretch. Later this year, the band will start writing the follow-up to their first album ‘Sleepers In The Rift’.