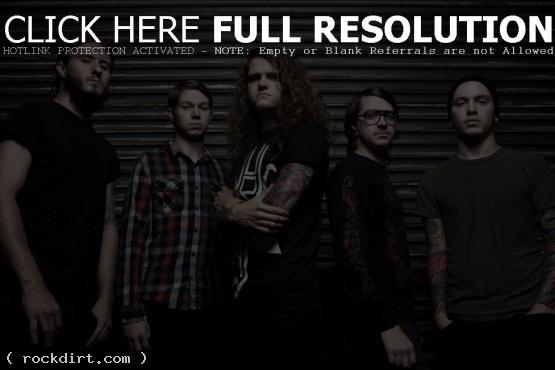 Miss May I will enter The Machine Shop studios starting in early January to begin work on their third release for Rise Records, which is tentatively scheduled to drop in spring 2012. The LP will be produced by Machine (Chiodos, Every Time I Die, Lamb Of God, Four Year Strong) and according to bassist/clean vocalist Ryan Neff, will be the band’s “most metal and dynamic release thus far.”

The Ohio band has been writing songs since the spring of 2011 and began pre-production with Chris Rubey of The Devil Wears Prada during the summer while out on the Vans Warped Tour.

The forthcoming release will serve as the follow-up to the band’s sophomore effort ‘Monument’, which debuted at #76 on the Billboard Top 200. With combined sales of nearly 100,000 units over the course of their burgeoning career and a highly buzzed about stint on Warped Tour 2011, Miss May I is currently canvassing the country on their nearly sold-out No Guts, No Glory tour.

The band has also been confirmed as direct support on Whitechapel’s Recorrupter U.S. Tour and will join the lineup on Parkway Drive’s UK/European Tour, both of which kick off this spring (see dates below).