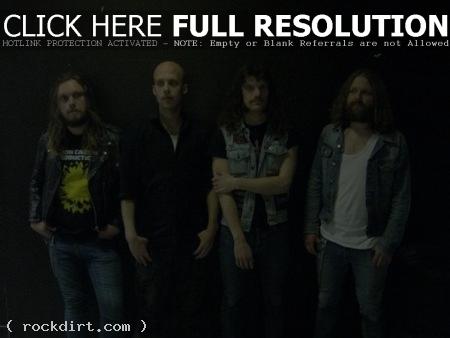 Miasmal have signed with Century Media, capitalizing on the growing fan base the Gothenburg-based band garnered with their previously released EP and studio album. Philipp Schulte, A&R at Century Media Records, commented:

We are very happy about the signing of Miasmal. The current death metal underground scene is offering many excellent new and promising bands, but only a few have that certain edge that makes you feel there is much more to come. It’s the combination of their music, style and attitude that makes Miasmal simply outstanding. When I listened to tracks like ‘Kallocain’, ‘Toxic Breed’ or the epic ‘Chronicles’ for the first time, I felt this band has a spirit most other bands are lacking.

We are happy to announce that we just signed a deal with Century Media! As fans of many of the label’s releases and bands, we feel that we are in good company. The new cooperation offers lots of opportunities for the making of our next record which is something we are very excited about. We’ve just begun the writing process and plan to head to the studio during the winter to immortalize our 2nd album and Century Media debut.

Miasmal is currently on tour in Europe to promote their latest studio album. Tour dates are as follows:
May 13 – Germany, Berlin at Koma F
May 15 – Germany, Göttingen at Juzi
May 16 – Germany, Koblenz at SK 2
May 17 – Germany, Bielefeld at AJZ
May 18 – Holland, Venlo at Slow End Fest
May 19 – Belgium, Liège
May 20 – France, Bordeaux at Heretic Club
May 21 – France, Toulouse at La Dernière Chance Bar
May 22 – Spain, San Sebastian
May 23 – Spain, Zaragoza at Mogambo
May 24 – Spain, Barcelona at Los Bloques
July 19-21 – Hell’s Pleaseure Fest