Lamb Of God Take A Break From Politics On ‘Sacrament’ 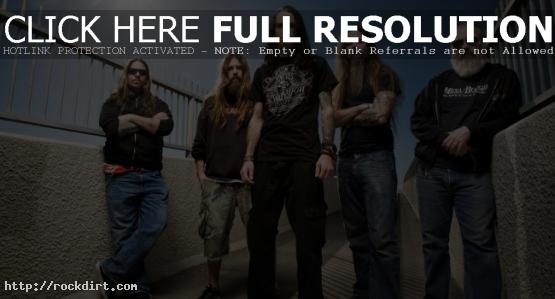 Thrashpit caught up with Lamb Of God frontman Randy Blythe, where he was asked about how their 2006 release ‘Sacrament’ seems much more personally confrontational than the group’s prior records. “We had two highly political records we wrote with ‘As the Palaces Burn’ and ‘Ashes of the Wake’,” Blythe explained. “With ‘Palaces’ we’d been having a hard time over in the Middle East and with the Bush Administration of course. With this one, Mark and I were like ‘well, we might want to step back from politics on this one.’ I’m a political science major and I’m a punk rock kid, and punk rock and politics generally go hand-in-hand, so we were worried after ‘Palaces’ we’d get branded as a political band. After ‘Palaces’ we wanted to write something not as political but the climates at the time were still pissing us off enough that we again wrote it politically. We generally write about issues that anger, sadden, or depress us. Again, when ‘Sacrament’ came around, we wanted to move away from the political thing. We aren’t a political party and we conscientiously wanted to try something a little more personal and a little more accessible. We wanted fans to be able to take a song and give it their own meaning, maybe put their own personal experiences to it. That’s just how our music goes though – we just don’t want to write the same album again and again!” Read more.