King’s X To Tour With Kansas This Fall 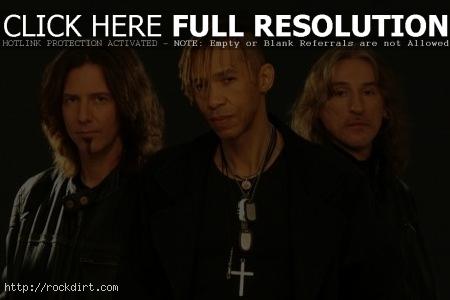 King’s X will return to the North American tour circuit this fall as direct support to Kansas. In regards to this upcoming trek, King’s X bassist/vocalist dUg Pinnick commented: “I’ve been a huge Kansas fan since the beginning. I remember sitting on the floor with my friends listening to the just released record ‘Song for America’…Fast forward to years later, King’s X is going on tour with them!! It is an honor to be doing shows with them. This is gonna rock!!”

With King’s X drummer Jerry Gaskill and lead guitarist Ty Tabor also onboard for the North American trek, these dates will mark the band’s first tour since Gaskill’s remarkable recovery from a major heart attack earlier this year. “Not too long ago I was thinking I might not ever get back on a stage, now I’m ready and with the ok from all my doctors,” said Gaskill. “What better way to get back than to tour with the legendary Kansas. Let’s rock…”

King’s X will be touring in support of ‘Live Love In London’, the live CD/DVD follow-up to their latest studio release, ‘XV’. ‘Live Love In London’ is the most expansive King’s X live offering to date, a career-encompassing package featuring ‘It’s Love’, ‘Over My Head’, ‘Black Flag’, ‘Lost In Germany’ and more. Recorded live January 22, 2009 at the Electric Ballroom, the 3-disc CD/DVD package (also available as a 2-CD set) showcases the amazing live performances that King’s X have been delivering to fans around the world for the past 25 years.

Kansas original member and guitar virtuoso Richard Williams added, “We are really looking forward to the upcoming shows with King’s X. They’re a great band and a force to be reckoned with. It’s a tour like this that allows us to dig a little bit deeper into our catalogue and play a few songs that Kansas fans haven’t heard for a while. It’s gonna be a lot of fun!”

On select dates, the one-man band That 1 Guy (featuring Mike Silverman) will open the show. All confirmed tour dates are below with more dates to be added soon. Tickets are on-sale June 15, 2012 unless otherwise noted.