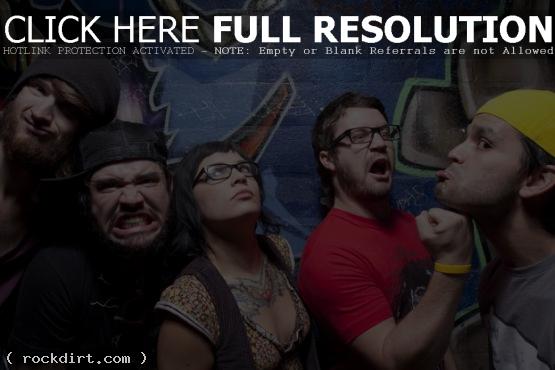 Having spent the better half of the last year on the road supporting acts such as Of Mice and Men and As I Lay Dying, Iwrestledabearonce announced that they will be headlining their next US tour, ‘Road To Metal Fest’, presented by Merch Now. Kicking off on April 16th in Oklahoma City, Oklahoma, the string of dates will lead into New England Metal and Hardcore Festival on April 21st and continue on until wrapping up in Flagstaff, Arizona on May 1st. Alongside Iwrestledabearonce, the “Road To Metal Fest” tour features some of the quickest rising acts in the heavy music scene including Molotov Solution, Glass Cloud and The Greenery. A full list of dates are below.

“We’re super excited about this tour and the opportunity to play New England Metal and Hardcore Fest again!” Iwrestledabearonce guitarist Steven Bradley enthused. The New England Metal and Hardcore Festival is the largest, longest running and most successful metal festival in the United States. “A lot of these shows are in venues we missed in 2011, so can’t wait to party with all you folks for the first time in a while. Come hang out with us and let’s make mistakes!”

Scott Lee, promoter for both the festival and the “Road To Metal Fest” tour added, “I’m very proud of the line up for this tour and I feel very comfortable that this represents the festival at its core. I’m also excited to get the chance to extend this tour leading up to the New England Metal and Hardcore Festival.” For more information on the New England Metal and Hardcore Festival, visit metalandhardcorefestival.com.