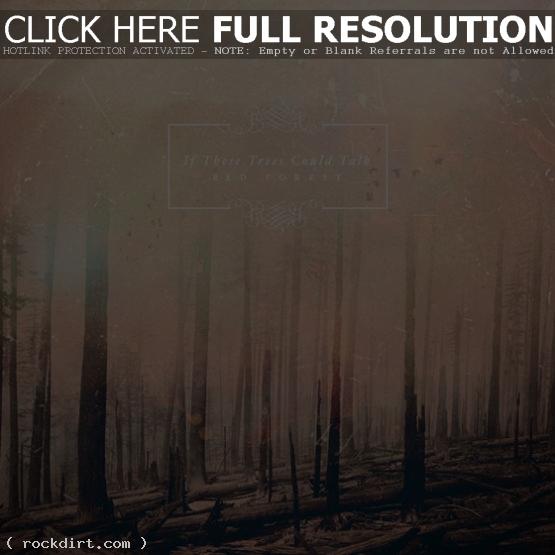 Akron, Ohio post-rock outfit If These Trees Could Talk has announced plans to release the band’s third album, ‘Red Forest’, on March 20th. Vinyl treatment will be released on Science of Silence Records, while the band will self-release the CD and digital versions. The nine song, 48-minute long album was self-produced throughout much of 2011 at NEMeadow Studios in Bath, Ohio. Will Putney mastered the album and Charlie Wagers of Three Bears Design was at the helm for art direction and design.

Red Forest gives fans their first look into new music from The Trees since their critically acclaimed full-length ‘Above The Earth, Below The Sky’, which was released in 2009. In 2006, The Trees released their debut self-produced eponymous EP, which was the launching point for their career.

“When we went into this record, we decided towards the end of the writing process that we wanted to self-produce and record it,” the band stated. “We had self-produced the last two albums, and wanted to continue on that path. This afforded us the opportunity to take our time with the tracks and gave them space to grow.”

Red Forest Tracklisting:
1. Breath of Life
2. The First Fire
3. Barren Lands of the Modern Dinosaur
4. They Speak With Knives
5. The Gift of Two Rivers
6. Red Forest
7. Aleutian Clouds
8. Left to Rust and Rot
9. When the Big Hand Buries the Twelve

The writing of the record came about very naturally, say the band members. “Once we decided that a song had made it far enough, we tracked it, re-tracked it and just kept adding onto it until we were happy with it. It was very much a write-as-you-record kind of experience. The recording console had a flat screen above it that played Koyaanisqatsi on repeat, which kind of encapsulates our feelings on what inspired the record.”

In addition to releasing new music, The Trees will embark on a two week European tour in April. “This is something that seemed out of reach, but has come to fruition in a very seamless way. We couldn’t be happier to finally be playing for fans that have been asking for so long. We really can’t thank them enough for all the support and passion that they have given us.” Starting off at Dunk! Festival in Belgium on April 7th, the band will make their way through Germany, Czech Republic, Poland, Austria, Hungary, Croatia, and finish with three dates at Astral Fest in Russia. See below for a full list of dates.