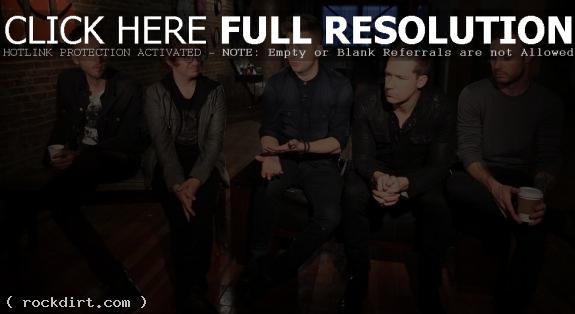 OneRepublic is out with behind the scenes footage from their ‘If I Lose Myself’ music video, where Ryan Tedder, flanked by his bandmates Zach Filkins, Brent Kutzle, Drew Brown and Eddie Fisher, talked about the meaning of the song featured on their upcoming third studio album ‘Native’ (Interscope).

“‘If I Lose Myself’ even though it sounds like this euphoric let’s go crazy tonight song, it’s actually about my buried, latent fear of flying and going down on an airplane, waking up on an airplane and finding out you’re actually going down, and having that moment of sheer panic, looking out the window, seeing your life pass before you, and then somehow finding comfort in the fact that the person sitting next to you is experiencing the same traumatic event,” Tedder explained. “If it’s someone you know or you love then it’s like, well, at least if I lose myself at least it’s with you by your side. It’s kind of a morbid concept, but that’s truthfully where the song came from. But it feels like it’s a celebration of the moment, so in a way that’s what it is. Celebrate now because you only have 60 seconds left.”

As for the concept of the Michael Mueller directed video, Tedder said, “I don’t want to give too much away, other than to say the video storyline was inspired by ’12 Monkeys’ and one of the scenes from ‘The Matrix’, follow the white rabbit. Of course the end, we wanted to have this experience where we’re in the middle of a flash mob kind of concert, but it’s not a typical concert because we’re actually part of the crowd.”

Watch it via VEVO below.