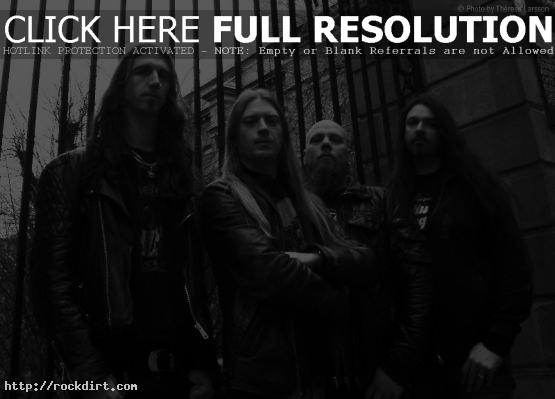 In support of this upcoming release, the Swedish death metal band will be touring North America with Morbid Angel and Dark Funeral this September/October. In regards to the album and tour, founding member Ola Lindgren (vocals/guitar) commented:
Grave will return to North America in September, sharing the madness with our comrades in Morbid and Dark Funeral. After the successful ‘Into the Grave’ sets we did in September last year, it will be very exciting to come back to promote the new album ‘Endless Procession of Souls’, which will be released August 28th in North America (Aug 27th in Europe) through Century Media Records. This killer bill is in extremo deluxe and will show you what brutality is all about…Beware the Winds of Chains!

Dark Funeral guitarist Lord Ahriman added:
We are extremely proud to announce our participation in the upcoming MORBID ANGEL tour throughout North American territories this fall. We will march alongside our Swedish comrades GRAVE and American death metal-bezerkers VADIMVON, and it is without a doubt that this very tour will surely be remembered as one of the most extreme tours of all time. Hence, we command all our loyal North American metal-demons to come out and celebrate utter darkness every night. It’s time to ignite the black flame and show the world that the force of extreme metal is unrelenting.