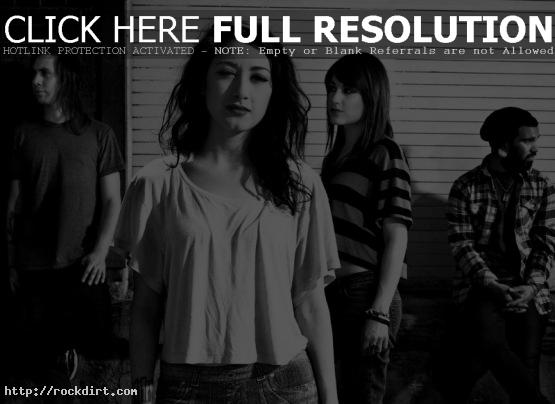 Phoenix-based rock group Eyes Set To Kill have inked a deal with Century Media Records after trying the independent route for a few years. Frontwoman Alexia Rodriguez explains, “For the past two years we have been touring around the world and evolving into the band we are today without the support of a label. We are finally happy to announce that we’ve found a home and family at Century Media and can’t wait for what is to come.”

“Century Media has been a fan of Eyes Set To Kill for years,” Century Media’s North America label President Don Robertson said, “so we’re honored that when the band finally decided to return to the label system that they chose to work with us.”

To celebrate the new partnership, the band had a signing party last night at Angels and Kings in Los Angeles. They will also be heading out on a month-long, headlining run next month on the “Show Your True Colors Tour”. “We’ve been touring Europe and writing a lot this year, so we are excited to announce our headliner in our Home, the US, this summer,” Alexia said. “We will be playing new songs on the ‘Show Your True Colors Tour’ and can’t wait to see how the fans will react to the new ESTK.” Check out a full list of dates below.