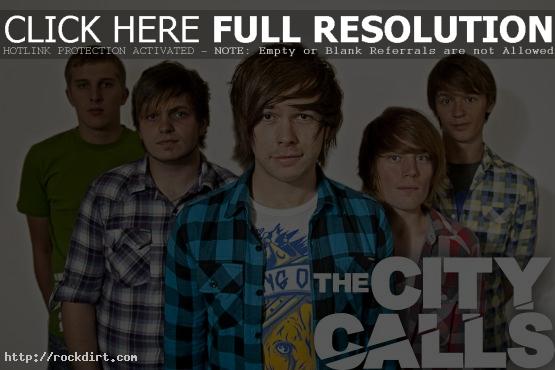 The City Calls vocalist Lucas Hardy and guitarist Scotty Perry checked in with their Facebook fans on March 17th with news on a major lineup change with the band. Guitarist Darren Ledwich, bassist Chris Aldridge and drummer John Plummer all are set to be out of the Southampton, England rock band once their shows in April conclude. Hardy and Perry write:

The last day of our February tour we had a very long conversation about our future and what we want to do with this band. Of course, it’s incredibly hard to predict the future; we’ve learnt that the hard way in some occasions. Believe us when we say it was a talk we did not want to have, but there comes a time to lay everything out on the table and be honest with each other.

Me and Scotty were honest in saying we want to take this band to greater levels and put everything we have into it. Chris, John and Darren were honest in letting us know that they would want the same things, but unfortunately their time in The City Calls has come to an end. It hasn’t been a lingering issue and it hasn’t been something we ever thought about intensely but when you ask someone else to take a leap of faith and put everything they have into something, they need to be ready to jump because as a band we need to be aiming for the same goals. Chris, John and Darren want to protect us by letting us take the band on the road for longer and to spend every minute making this happen, they just have other plans and obstacles in life that can’t allow them to do that with us. Which, is gutting to all of us but we respect them for being honest and having the strength to let go of the best part of three years to let The City Calls grow for the future.

We weren’t sure how to write this, but what we wanted to do was to be honest with you just as we were honest with each other. All five of us have had awesome fun playing as a band but at the same time it’s five individuals and at this time in our lives we want to keep our friendships and happiness in-tact. So, sadly, it came to their attention that it was time for them to move on and time for The City Calls to start their next chapter in complete positivity.

Chris, John and Darren will be touring with us until the end of the April shows and after that we look to the future with open eyes and the plans to have the best time yet. We want to thank every single one of you that has been a part of our band so far and it means the world to us so Thank You.

We hope you stick with us and join us in the massive plans we have for our band.

We are still a band and nothing will bring us down. Here’s to the future!