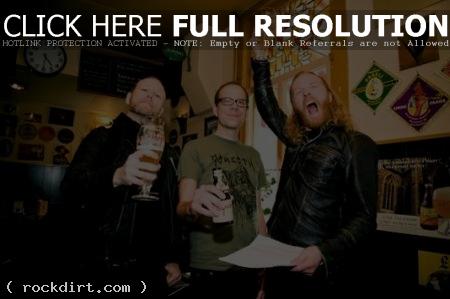 Century Media Records has renewed their deal for the third time with Swedish melodic death metal group Dark Tranquillity. The band from Gothenburg released their first album on Century Media Records in 1999, and since then has released 6 albums, plus 2 DVDs and a handful of special releases.

I start to believe in Numerology. 13 years ago, Dark Tranquillity signed their first contract with Century Media Records. Friday the 13th of April, I met Mikael Stanne and Niklas Sundin for the Roadburn festival at the lovely 013 venue in Tilburg to receive the signed copies of their 3rd Century Media contract for 3 more albums. The 3 of us had about 13 beers to celebrate it. It’s amazing how Dark Tranquillity are able to express their legacy as one of the original godfathers of the melodic death metal/Gothenburg sound without sounding outdated today. They always managed to stick to their roots and develop to new heights at the same time. Looking forward to the next album in 2013. Cheers!

After such a long history together, we’re more confident than ever that Century media is the perfect working partner for Dark Tranquillity. In a climate where a lot of record labels are weighed down by cynicism or have just plain given up in the face of the rapidly changing industry climate, Century media are still enthusiastic and forward thinking and take huge pride in releasing great music that matters. Here’s to another 13 years!