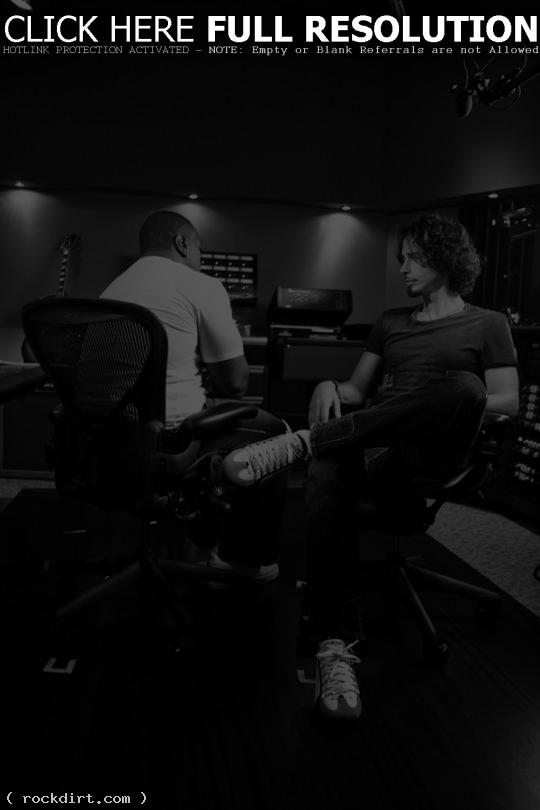 Chris Cornell was in the studio with Johnjay and Rich of 104.7 KISS FM in Phoenix, Arizona on Thursday (August 7), where the former Soundgarden and Audioslave frontman promoted his new solo single ‘Long Gone’, the lead release off his third solo album ‘Scream’, out later this year (according to Chris “I think in October”) via Interscope/Suretone. Cornell talked about doing the James Bond theme song for ‘Casino Royale’, his “completely supermodel hot” wife Vicky, and wishing he could write a song with Beck’s kind of attitude.

They then got Timbaland on the phone from his home in Miami, and they talked about how they met up over the phone initially and the process they went through to come up with songs. “I was pysched the whole time,” Cornell said. “Everything that we were doing I was totally into. Tim’s a complete genius, and the album even went into a direction for me, that was kind of a dream come true, where you put me with someone like Tim, who people think of as like a hip hop or pop producer, and we made the most album oriented album of my career, where it’s really a record that’s more like Pink Floyd’s ‘The While’ or Queen’s ‘A Night At The Opera’.”

To the 25-minute interview audio, ending with ‘Long Gone’, at johnjayandrich.1047kissfm.com has since been removed.

«Mindless Self Indulgence ‘Never Wanted To Dance’ Video
On TV: Underoath, MGMT, Story Of The Year»