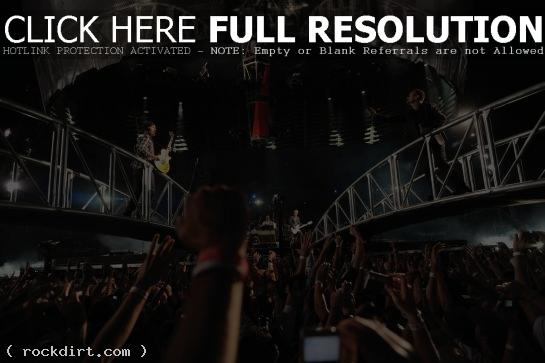 In an online Harris poll conducted in March with 2,230 adults participating, U2 was named the favorite band of Republicans, while Celine Dion took the top spot for Democrats, and independents went for The Beatles. U2 were also the top choice of wealthy people, with the Irish band topping the list for those with a household income of greater than $75,000. Amongst those making less than $35,000, The Beatles were the top pick. Celine was the favorite for the middle income respondents.

Iggy Pop has comes out on top of a ‘worst face in showbiz’ poll taken by The Good Surgeon Guide, a British cosmetic surgery review website. The rocker is joined by Donatella Versace, Pete Burns and Cher. Watch a report from ITN, featuring a rundown of the worst faces below.

‘Definitely Maybe’, the Oasis debut, has been named the Greatest Album Of All Time in a survey organized by the book of British Hit Singles and Albums and NME.com. The album topped the Beatles’ ‘Sgt Pepper’s Lonely Hearts Club Band’, which came in second, and ‘Revolver’, placing third.

Rockdirt.com’s latest poll asking readers if they felt the ‘Nu-Metal’ genre is dead had most saying it basically was, though existing big name acts like Korn or Limp Bizkit can still produce the sound. Our latest poll asks which modern era rock star is the most effective political activist.

No Love Lost For Creed

Well our last survey asking what your opinion of Creed was didn’t bring the friendliest of responses from visitors… nearly half of you called them ‘Pearl Jam wannabes’ while 23.58% said ‘They are good rockers’. Some went so far to say ‘They’ll go down as our generation’s Led Zeppelin’, but just under 5% gave that level of praise.

Our latest poll asks what is your favorite Alice In Chains song… Unfortunately I only have 12 slots, which for a band that had only 3 full length studio albums (plus ‘Jar Of Flies’, ‘Sap’, an unplugged disc, and various best of releases) would seem like enough, but it isn’t. The fact is, despite Pearl Jam or Nirvana getting more credit in the ‘grunge’ scene, AiC basically, to put it in modern terms, put out 3 straight Linkin Park ‘Hybrid Theory’ level of albums in terms of radio releaseable hits — meaning about every song on every album at the time could have been a hit.