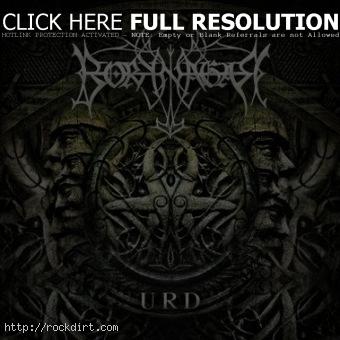 Norwegian avant-garde metallers Borknagar have unveiled the cover artwork for their new studio album ‘Urd’, set to be released on March 26th in Europe as well as March 27th in North America via Century Media Records.

The album’s artwork was designed by Brazilian artist Marcelo Vasco, who has not only already worked on the band’s previous Universal release, but also with artists such as Soulfly, Belphegor, Einherjer, and Keep Of Kalessin.

The cover and design for ‘Urd’ is spot on when it comes to portraying the very core of the band. This time around we wanted an earthly expression through our cover and general design to support and empower the main themes on the album. You can almost smell and feel the texture of the old Norse wooden carvings – still there is a sophisticated and eclectic approach to the expression that entwines perfectly into the music. Marcelo Vasco enhanced our ideas into brilliance, he painted the face of the beast that is about to be unleashed…

Borknagar has recently finalized mixing duties for the album with Jens Bogren at Sweden’s Fascination Street Studios. The track-listing for the album is as follows:
Borknagar ‘Urd’ track-listing:
1. Epochalypse
2. Roots
3. The Beauty Of Dead Cities
4. The Earthling
5. The Plains Of Memories
6. Mount Regency
7. Frostrite
8. The Winter Eclipse
9. In A Deeper World

The band previously explained the album title and its overall concept as follows:

Our previous album was called ‘Universal’ and where should we go after an album title with such a magnitude? Well, we decided to head back home to earth. We really wanted to get back to the core of the band, where it all started – the admiration and pondering about nature and mankind’s place therein. ‘Urd’ is the name of one of the norns that according to northern mythology stands under Yggdrasill and weaves the lifeline of mankind. ‘Urd’ is representing the past, while ‘Verdande’ is representing the present and ‘Skuld’ is representing the future. You might very well say that this is an ancient expression of what we today know as DNA. And I have always been very fascinated by the fact that parts and bits of our DNA actually derive from the very beginning of time. All living creatures are somewhat connected to the very first organic cell. That is some of the story behind the album title…