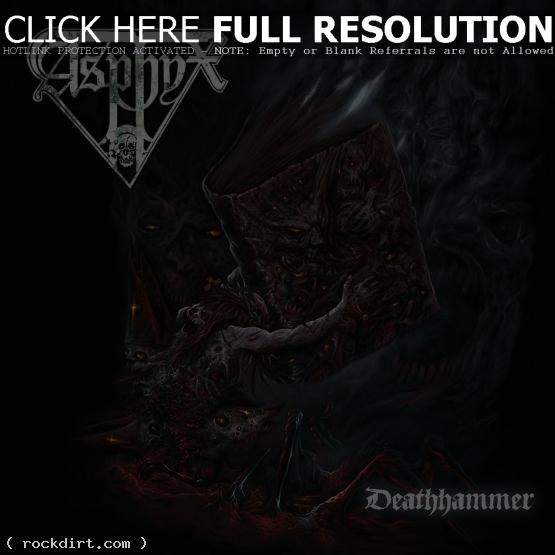 ASPHYX premieres “Deathhammer” music video on Brooklyn Vegan
Asphyx are out with the music video to their new single ‘Deathhammer’, the title track from the Dutch doom-death metal band’s new album, released via Century Media Records on February 27th in Europe and February 28th in North America.

The ‘Deathhammer’ video clip was shot earlier this month by Maurice Swinkels of Younique Film, who had previously worked with the band on the bonus DVD for the ‘Death… The Brutal Way’ album release as well as for bands like Exodus, Masterplan, Kataklysm, and many more.

The band had this to say about the video:

Yet another official Asphyx video, but this time slightly differently. A furious, ‘fast’ clip with aggressive filming, which fits the song perfectly. This one was shot by Maurice of Legion Of The Damned and we knew that he could capture the spirit and intensity of the song 100%. And he did. The clip shows Asphyx in a true way….a band being themselves and doing their own thing. Enjoy!

Recorded at The Mörser Studio as well as at Harrow Studio with engineer Harry Wijering, ‘Deathhammer’ was mixed and mastered in Sweden by Dan Swanö, who previously worked with the band on their ‘Death… The Brutal Way’ studio album release from 2009 as well as on the ‘Live Death Doom’ live DVD release from 2010. Long-time design partner of the band, Axel Hermann, has once more provided the artwork.

‘Deathhammer’ track-listing:
1. Into The Timewastes
2. Deathhammer
3. Minefield
4. Of Days When Blades Turned Blunt
5. Der Landser
6. Reign Of The Brute
7. The Flood
8. We Doom You To Death
9. Vespa Crabro
10. As The Magma Mammoth Rises