Anna Calvi Discusses The Moments Of Darkness On Her Debut Album 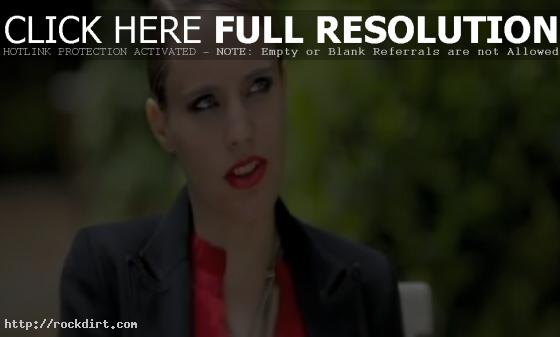 Footage of Anna Calvi performing ‘Rider To The Sea’ on the BBC’s Live From Abbey Road show on June 17th has been posted online. The clip has the English indie rock artist talking about the tone of her self-titled debut album, which came out in January on Domino Records.

“Some people have said that the record seems quite dark, and I don’t really see it like that,” Calvi said. “There are moments of darkness, but it was just because I really wanted to write what felt really honest to me and write passionate music and not be afraid of subjects that might come to me that I might feel a bit like, ‘Oh, should I say this?’ When I mention the devil, it’s more of a metaphor for being out of control. It’s not really the literal sense of the devil, but it’s about a force that might be inside you and whether you let go and embrace it or whether you try and keep in control. It’s kind of that fight, that push and pull that I feel is part of life really and what I like to express in my music.”