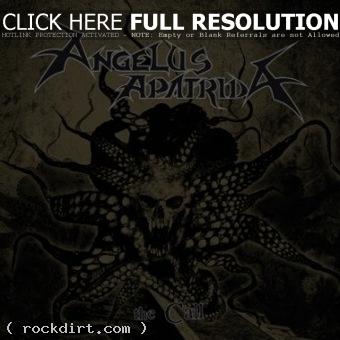 Spanish thrash metallers Angelus Apatrida are back with a new studio album entitled ‘The Call’, which is to be released on April 30th in Europe and digitally on May 8th in North America via Century Media Records. The same creative team that worked on the band’s previous release, ‘Clockwork’, has teamed-up with them again for this new effort: it was once again recorded in Moita, Portugal at Ultrasound Studio with producer Daniel Cardoso and the artwork was handled by Gustavo Sazes from Abstrata.

In regards to the artwork, Angelus Apatrida commented:

The cover presents the character of the creature that’s gonna start the Armageddon. We wanted the beast to look majestic and powerful and we definitely think that Gustavo achieved that. We believe the cover fully represents the spirit of what you are going to listen…and you better be prepared, cause is coming to get you!