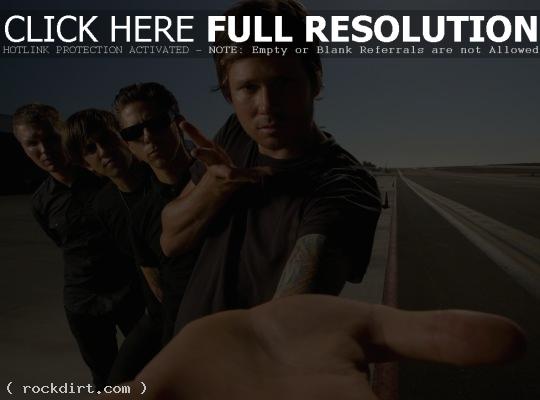 Angels & Airwaves performed their ‘I-Empire’ song ‘Everything’s Magic’ on the ‘Larry King Live’ Christmas special on Friday (December 21). Before the performance, Larry talked with the group. Watch the interview and performance at YouTube. Read on for the transcript.

KING: They are the alternative rock band Angels and Airwaves. Their new album is “I Empire,” and it debuted at number nine on the U.S. Billboard 200 chart; 66,000 copies sold in its first week. We’re happy to meet them tonight. They are Tom Delonge, the singer and guitarist, David Kennedy, another guitarist, Adam Willard, the drummer, and Matt Wachter, the bassist. You were with Blink 182, right?

DELONGE: Yes, I sure was.

KING: How did this group form?

DELONGE: Well, we got together like most bands, a bunch of friends and we all grew up listening to the same kind of music and we grew up as skateboard kids in the same area. So we just very normal.

KING: You’re all about the same age?

DELONGE: We sure are.

KING: Matt, you were with 30 Seconds to Mars. Why did you leave them? Thirty seconds were up?

WACHTER: This is my calling. It was kind of just — you know, just had run its course for me. I just wanted to spend more time with my family and decided quickly that I wanted to play in a band again. So, Tom called me up and said we need a bass player. So —

KING: This is your second album, right?

KENNEDY: Yes, it is.

KING: Tell us about it.

KING: Adam, how did you come up with the name?

WILLARD: When you’re coming up with the name of a band, it was kind of a chance to start over for all of us. It was one of those things that you keep saying it and nobody was really sure what we wanted to call it, because we wanted it to be something very unique that no other band can be named, Angels and Airwaves. So we kept saying it around the studio, and it finally just stuck. Somebody said it and we’re like, that’s it.

KING: Tom, are you touring now?

DELONGE: Yes, we just got back, doing a bunch of festival shows here during the holiday season, and we’ll be going back out in the first week of February, North American tour. And we wanted to make sure it was going to be the coldest it could possibly be when we go out there.

KING: So you’re going to Montreal in December and January?

KING: You guys are terrific and the audience is going to hear how terrific. Thank you all very much. The group is Angels and Airwaves. And from their new album “I Empire,” they perform “Everything’s Magic.” Enjoy.